Ibiza - An Expression of Freedom and Tolerance 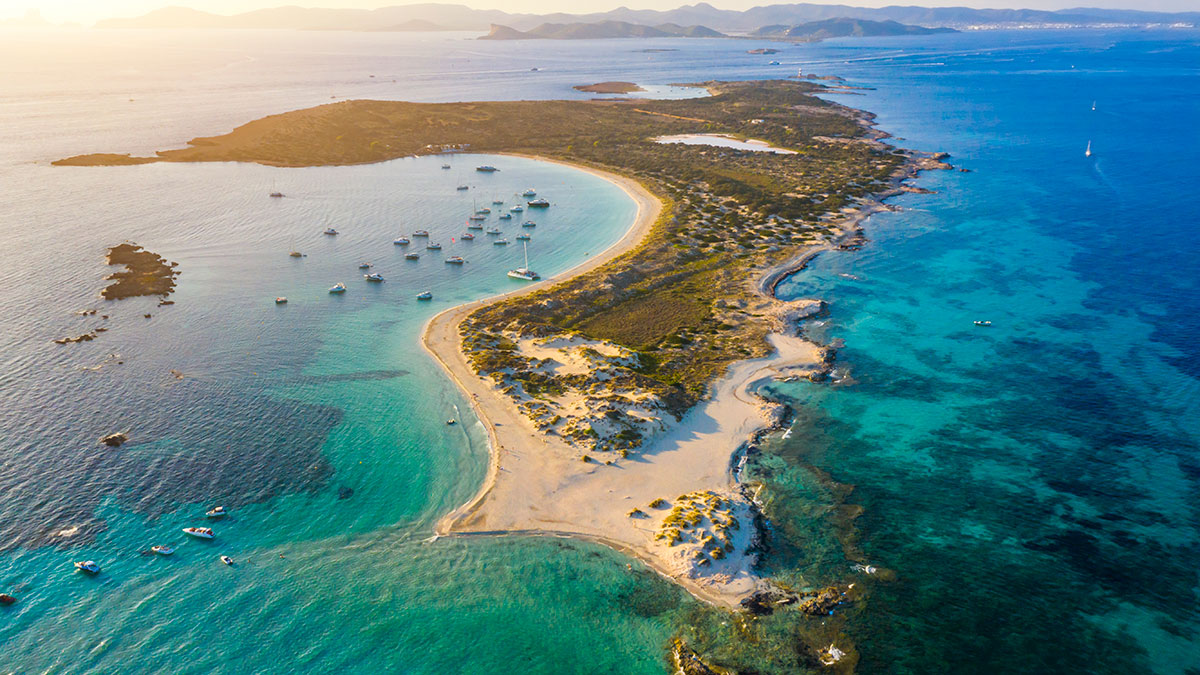 Since the flower power generation moved in, Ibiza has been seen as an expression of freedom and tolerance. What makes the island so popular is its lively blend of concentrated joie de vivre and brash extravagance, Mediterranean mentality and gentle hippiedom.

Ibiza's real charm lies in its varied character: the east cost is dominated by the lively capital, Eivissa – with the old cathedral at the highest point and cult bars, clubs and at its feet shops full of the latest fashions in the labyrinth of winding streets. The island also has more than 70 beaches, and the picturesque narrow bays between high cliffs are known as Calas. Gourmets can discover all sorts of perfect fish in the tiny bars in villages like Sa Cala de Sant Vicent. In Sant Pere de Peralta, the hippie market is the main meeting point.

And if life along the coast is too loud, too brash and too hedonistic, you can find peace in the mountains, walking to the fortified village of Balàfia or staying in old farmhouses, known as Fincas. There is even a good path that leads between stone walls right to the highest point on the island: Sa Talaia (1560 feet). If you’re feeling really fit, you can even climb it on a mountain bike!

Eivissa, the capital of the Pitiusas (Pine Islands), is the cultural, social and political center of the island. It is home to all the attractions and the brash eccentricity that have made the island famous all around the world. The cathedral sits on the highest point of the venerable Dalt Vila. Below this, elegant houses cling to the slopes of the hill in terraces.

Europe’s best-preserved fortified city is a labyrinth of narrow, winding streets. It is as if time has stood still here. Below the city wall are the two picturesque districts of Sa Penya and Sa Marina. By day, the lower part of the town seems somewhat sleepy, but it is buzzing at night. Passeig Vara del Rei, which is surrounded by grand houses, is the main square in the new part of Eivissa. The cafés and restaurants are an invitation to linger a while. On the other side of the harbor, white luxury yachts bob in the exclusive Marina de Botafoc. The panoramic view from here over the old town at night is simply breathtaking.

The Reserva Natural de Ses Salines in the south of the island is the most important nature reserve in the Pitiusas. On the Platja Ses Salines, the “Sa Trincha”, “Jockey Club” and “Malibu” beach bars are the most popular meeting points. The more daring drinkers head for the legendary “El Chiringuito” on the Platja des Cavallet.

Long sandy beaches stretch out over an area of more than four square miles alongside lakes used for salt extraction. It is home to many wild birds. Migratory birds also spend the winter here, and in winter you can see flocks of pink flamingos flying over the lakes. The many paths are perfect for lovely walks and bicycle rides. If you ride along the salt basin, you can see the crystals of the salt mountain shimmering in the distance like an iceberg. As long ago as the time of the Carthaginians, this ‘white gold’ was the main source of income for the islanders. Every year, around 70,000 tons of salt are extracted and exported from the Sa Canal harbor to the Netherlands and Denmark.

At 1,560 feet, Sa Talaia is the highest mountain on the island. Its name goes back to the Arabian occupying forces. At its feet is the village of Sant Josep. The center of the village is Plaça de s'Església, which was restored in typical island style a few years ago. Locals and tourists alike meet for a chat under the thousand-year-old olive trees.

The one-hour walk to the top of Sa Talaia is an impressive nature trail. You walk under shady trees past olive groves and old vineyards, from which the traditional "ví pagés" is made. In good weather, the view stretches as far as Alicante. You can tell that village life in Sant Josep is very much alive and well, especially on a Sunday, when the locals make their way to church. The massive Church of Sant Josep was built around 1730 and is home to one of the most beautiful altars on the island, which was created by the Mallorcan Peter Bosch. The carved wooden pulpit is also worth seeing.

An attractive fortified church is surrounded by a handful of white houses and a little main street, which stretches all of a hundred yards through the village. You'll also see a few boutiques and little shops, among them the legendary “Bar Costa” – this is the artists' village of Santa Gertrudis.

Artists and art lovers meet in the bar over a delicious “pa amb pernil” (ham roll) and swap the latest gossip on the island. There is also the bizarre sight of numerous legs of ham dangling from the ceiling, and an impressive collection of pictures in the back rooms. As Santa Gertrudis is the most central place on the island, every day tripper is almost forced to pass through this little village. Whether you are browsing through the junk shops of Casi Todo for antique furniture and curiosities of all kinds, taking a look at one of the two art galleries, Can Daifa and Libro Azul, or simply enjoying a “pa amb pernil” or a stylish evening meal on the church square, Santa Gertrudis is simply the cult place to be!

The historic settlement of Balàfia, not far from the village of Sant Llorenç, is the best-preserved fortified village on Ibiza. The complex, which comprises five white cube-shaped farmhouses (cas pagés) nestled close to one another, is a perfect example of the original peasant architecture of Ibiza.

The traditional cas pagés is based on Arab design and is the island's trademark. The flawless beauty of the house, which is made up of several cubes put together, was the result of a feeling for functionality and climate – an aesthetic which inspired leading architects and designers, including Le Corbusier, Josep Lluís Sert and Walter Gropius, the founder of the Bauhaus movement. The three fortified towers in the settlement are a reminder of the threat pirates represented in the 16th century. The fishbone pattern of the red-brown towers, the crosses drawn in chalk to ward off evil spirits, the three-foot thick protective walls along narrow streets, the grain mills, the oil presses, the baking ovens and the wells make Balàfia a real treasure trove.

This small linear village is regarded as the birthplace of flower power. The hippies living on Ibiza in the mid-sixties used to meet at “Bar Anita’s”. The bar, with its picture-postcard patio, still retains its characteristic atmosphere. Just a few hundred yards on from the center of the village, the best hippie market on the island takes place every Saturday in Las Dalias (all year round, from 10 am to sunset).

In the brightly decorated interiors and in the yard surrounded by vineyards, hippies peddle silver jewelry, ceramics, incense, brightly colored clothing and exotic culinary treats. At the same time, the culture center also houses a restaurant, a concert hall and an art gallery. As well as its reputation as a meeting place for hippies, the pretty Església de Sant Carles is the venue for wonderful classical concerts by international performers every summer. A few miles further on is the popular nudist beach of Aigües Blanques. Surrounded by high cliffs, the 500-yard-long beach is a hot favorite with those in the know.

The magnificent curving bay of Sant Vicent is surrounded by steep, thickly wooded, rugged cliffs. The wide sandy beach and turquoise sea are what make this holiday resort in the north of the island so popular. The bars and restaurants along the beachfront promenade are an invitation to linger a while. The view from the Punta Grossa, at 570 feet, is among the most beautiful in Ibiza.

Opposite, you can see the Illa Tagomago. It is one of the few private islands in the world, and also a bird sanctuary. There is a hidden Punic temple near the Cala. From the 5th to the 2nd centuries B.C., Es Cuiram was a holy place for the worship of the island goddess Tanit. The little village of Sant Vicent is worth a detour for its beautiful 19th-century fortified church. The houses are scattered about in this remote area with its charming rural landscape. There is a lovely excursion that passes terraced fields of orange and almond trees on the way to the fishing village of Port de ses Caletes.

One of the most unusual places in the Pitiusas is the jagged islet of Es Vedrà, a magnificent 1,250-foot rock. Because of its majestic appearance, people have been ascribing magical powers to it since time immemorial. The view of the silhouettes of Es Vedrà and Es Vedranell at sunset is particularly spectacular. There is a footpath along the coast to the Sa Torre del Pirata watchtower.

There are many legends about these magical rocks: some believe they are the remains of the lost city of Atlantis, or the counterpole of the Bermuda Triangle, while others actually believe the island is a landing site for extraterrestrials. It is believed that the Carthaginians worshipped their goddess of love, Tanit, in the caves of Es Vedrà. In the 19th century, Carmelite monk Francisco Palau, who lived as a hermit on Ibiza, chose it as the perfect spot for meditation. What remains a mystery is the fact that carrier pigeons lose their sense of direction when flying over the islet, and goats can live here even though there is no drinking water on the barren isle.