Florida - the Number One Tourist Destination in the US 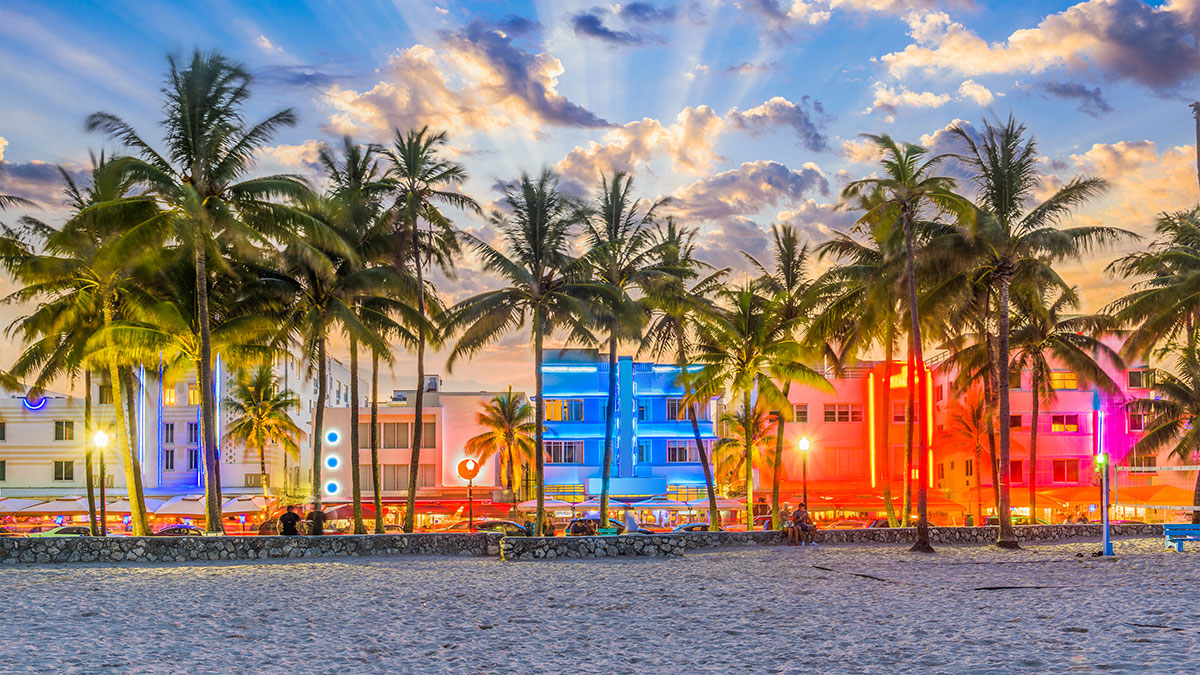 365 days of sunshine a year is the perfect prerequisite for a region which is dedicated to a laid-back life and entertaining pastimes. Florida is easily the number one tourist destination in the U.S.

It naturally attracts visitors to its huge amusement parks - Disney, Universal and Seaworld - at which the grandiose fairyland worlds and visions of the future promise children and adults alike a very special experience. Miles of white sandy beaches, attractive spas, and resort hotels with a huge range of sport and leisure activities all contribute to the perfect holiday experience.

Nature also plays a part in Florida's entertainment value. In the tropical landscapes of the Keys, a glorious, colorful underwater world attracts divers in droves. The biodiverse swamps of the Everglades offer adventurous boat tours. It is rounded off by diversified small towns such as the Hispanic-influenced St. Augustine or the lively Key West with its Caribbean Flair.

Large palm trees, colorful cocktails, extravagant cabriolets, white sandy beaches – this is how most people imagine Miami. In reality, Miami is a melting pot of various nationalities, cultures and religions, offering a colorful diversity in all areas of life. Nearly half the 2 million inhabitants are of Hispanic origin and, together with the deep cultural roots of all the immigrants living there, give this city in the south of the Sunshine State an international feel. You can feel the roots of the Latin-American influence in every corner of the city – particularly in Little Haiti and Little Havana – in the fiery gastronomy and the rhythmic music.

As in many American metropolises, tall modern bank buildings form the skyline of the international financial and trade center here. In downtown Miami, shopaholics as well as art and culture fans can get their money’s worth. Next to the Miami Art Museum (with changing exhibitions), the Metro Dade Cultural Center and the Historical Museum of Southern Florida await visitors. The unique mixture of an international metropolis, numerous scenic attractions, cultural diversity, restaurants and shops for every taste make Miami one of the most attractive and lively cities in the world.

A city was founded in 1915 which sparked colorful images of summer, sun and holidays in everyone's eyes. Miami Beach was originally an unattractive strip of island in the Atlantic Ocean in front of the coast of Miami. In 1925, by building numerous hotels, sports complexes and exotically designed green areas, the millionaire Carl Fisher paved the way for the drastic transformation of the island to one of the most popular holiday destinations for many Americans.

Today, the lively city has developed into a mecca for the rich and beautiful. In no other metropolis do the borders of kitsch and art merge together so much as in the famous Ocean Drive in the Art Deco quarter of South Beach. Stars and starlets rush around between artists and tourists here to see and be seen. Furthermore, in addition to all the beauty and the extravagant lifestyle, Miami Beach boasts exquisite cuisine and miles of white, dreamy beaches all year round.

When the space center at Cape Canaveral opened, Florida became the world's most important center for space research, the electronics industry and armaments. It was from here that Neil Armstrong and Edwin Aldrin set off to become the first men on the moon in 1969.

The NASA Kennedy Space Center (http://www.ksc.nasa.gov) is one of the region's biggest tourist attractions, especially since visitors can take part in the live rocket launches which take place several times a year (information available at 407-867-4636). The IMAX cinema also re-creates legendary space events. There is a two-hour Red Tour around the extensive grounds, which includes a visit to the VAG building (where the rockets are put together) and the Apollo Saturn V Center, which documents the spectacular 1969 moon landing. As well as several types of rockets, an accurate reproduction of the Space Shuttle and a number of other attractions, you can visit the U.S. Astronaut Hall of Fame - a multimedia homage to the famous astronauts and the history of space technology.

The natural habitat of the Everglades is truly unique and includes wide stretches of marshland, a wilderness sanctuary for crocodiles, alligators, Florida panthers, tortoises, more than 300 different types of aquatic birds and endangered species of plants.

It is the third largest national park in the U.S. and has some wonderful nature trails, a marina where you can rent boats or canoes, and beautiful lodges where you can spend the night. At the Visitor Center at the entrance to the park, there is a film documenting the history and the ecosystem of the park, and experienced rangers give useful tips on seeing the park. There are a number of trails and footpaths through the marshes, although the Gumbo-Limbo and the Anhinga Trail are the most interesting. These extended gangplanks lead through wild reeds and bushes, and also give you an opportunity to observe reptiles, turtles and tortoises.

The most southerly town in North America attracts hordes of tourists every year. It has always been a little unconventional: because of its position near the Caribbean, over the course of history it has offered refuge to pirates, immigrants stranded after shipwrecks and artists.

The central Mallory Square bustles with life every night. Acrobats, musicians and peddlers selling kitsch and hippie accessories all vie for attention from the public. One of the main attractions on the square for young and old alike is the Key West Aquarium, which documents the colorful underwater world of the Keys. In the Shipwreck Historeum, everything revolves around treasures from shipwrecks found in the sea near Key West. Tennessee Williams and Ernest Hemingway both spent many years of their lives in this lively little town. Between 1931 and 1946, the latter lived and worked in the atmospheric Hemingway House, which has now been turned into a museum. Legend has it that he used to go for a drink at the nostalgic Sloppy Joe's. He actually spent his evenings in Captain Tony's Saloon.

This place on the Gold Coast is paradise for the rich and famous of America. The champagne flows at the V.I.P. bars, and the high society hits the floor at the elegant clubs. Bentleys and Ferraris sitting in front of the whitewashed million dollar villas are all part of the game. But don't worry, less well-off tourists are also tolerated in this elite little enclave.

Mere mortals can only gaze at the outside of Mar-a-Lago, which was built in the Spanish Moorish style in 1923, but this does give you an impression of the fairy-tale splendor of the 118-room property, which is run by Donald Trump as a private jet-set club. However, anyone is welcome to visit the palace, which was built by the legendary railway pioneer Henry M. Flagler in 1910 as a wedding present for his young wife, and which has now been converted into a museum. The Louis XV-style rooms, and especially the ballroom, are unmatched in pomp and splendor. The luxury shopping street Worth Avenue, which was built in around 1920, has shops belonging to everyone who is anyone in the designer world.

This settlement, which was founded by the Spanish, is the second oldest town in the U.S. behind St. Augustine. The city fathers have renovated the historic quarter beautifully, making it a very attractive setting. Pensacola Beach is adjacent to the wonderful beaches of the Gulf Islands National Sea Shore.

The center is the Seville Historic District, under a preservation order for its wonderful 19th-century buildings, which are proudly exhibited in the open air Pensacola Historic Museum. It is housed in a church dating back to 1832 which exhibits the possessions of well-to-do settlers from Indian pottery to intricate glass utensils. However, the main tourist attraction is the daring aerobatic spectacle of the Blue Angels. The group of pilots belongs to the U.S. Naval Air Station, one of the largest marine air stations in the world. You can experience your own high-altitude flight at the National Museum of Naval Aviation, which has airplanes old and new alike and an IMAX screen showing the 3-D film The Magic of Flight.

The oldest town in the U.S. has retained the charm of a former Spanish colony. Painstakingly restored buildings line the pretty little streets of the Spanish Quarter, and actors in costume re-enact the life of the town as it would have been some 400 years ago. St. Augustine also has some wonderful beaches - making it a wonderful place for a little sunbathing or swimming.

Castillo de San Marcos was built by the Spaniards between 1672 and 1695 and has survived so well thanks to the 13-foot thick foundation walls made of coquina (chalk formed from fossilized shells). The interior of the castle and its museum are not particularly spectacular, but you can get a wonderful view over the town from the walls of the fortress. Another highlight is the Lightner Museum, a converted luxury hotel dating back to 1888. The recreation of a Victorian village and the collection of antique furniture, historic costumes and oriental art are all very much worth seeing. Flagler College, with its rich terra cotta ornamentation and arcade-lined inner courtyard, also started out life as a hotel.

Sun and fun are very much on the agenda of this holiday resort, which claims to have 361 days of sunshine a year. The St. Petersburg peninsula is at least 12 miles wide and sprinkled with numerous hotels and excellent leisure facilities for tourists. But it is not only the glittering sandy beaches which draw in the tourists in their droves. The city also has some stunning cultural highlights.

The Salvador Dalí Museum owes its spectacular collection to the Morses, industrialists who patronized the artist for about 40 years and bought some 1,400 of his works. With 95 oil paintings, 1,300 prints, 100 watercolors and numerous sculptures, the museum has the largest collection of Dalí's works anywhere in the world. The half-mile long pier is lined with boutiques, snack bars, restaurants and a little aquarium, which makes it a wonderful place to go for a stroll, have a bit of fun or simply watch the world go by. Also worth seeing is the Don CeSar Beach Resort, a palace hotel in a wonderfully kitsch wedding-cake style dating back to 1928, which is now under a preservation order.

Curtain up for Mickey Mouse! There are four massive theme parks on an area covering 43 suare miles, as well as a perfect infrastructure of hotels, restaurants, shops, water parks and sports resorts.

The Magic Kingdom Park is a seductive adventure into fairytale worlds, such as the Cinderella Castle or Tomorrow Land with its science fiction adventures. In the Epcot Center, you'll race in the Spaceship World through the history of communications, go on diving expeditions or risk your neck in motor races on the Test Track. In the Animal Kingdom, tigers wander through the jungle, giraffes and elephants roam the savannah - you could almost believe you had been transported away to South America or Africa. In the Disney-MGM Studios, it's all about movies. There are breathtaking film sets where visitors can come into close contact with the jaws of a great white shark, look underneath Marilyn Monroe's skirt or learn about fear at Jurassic Park.