Colorado - the Highest State in America 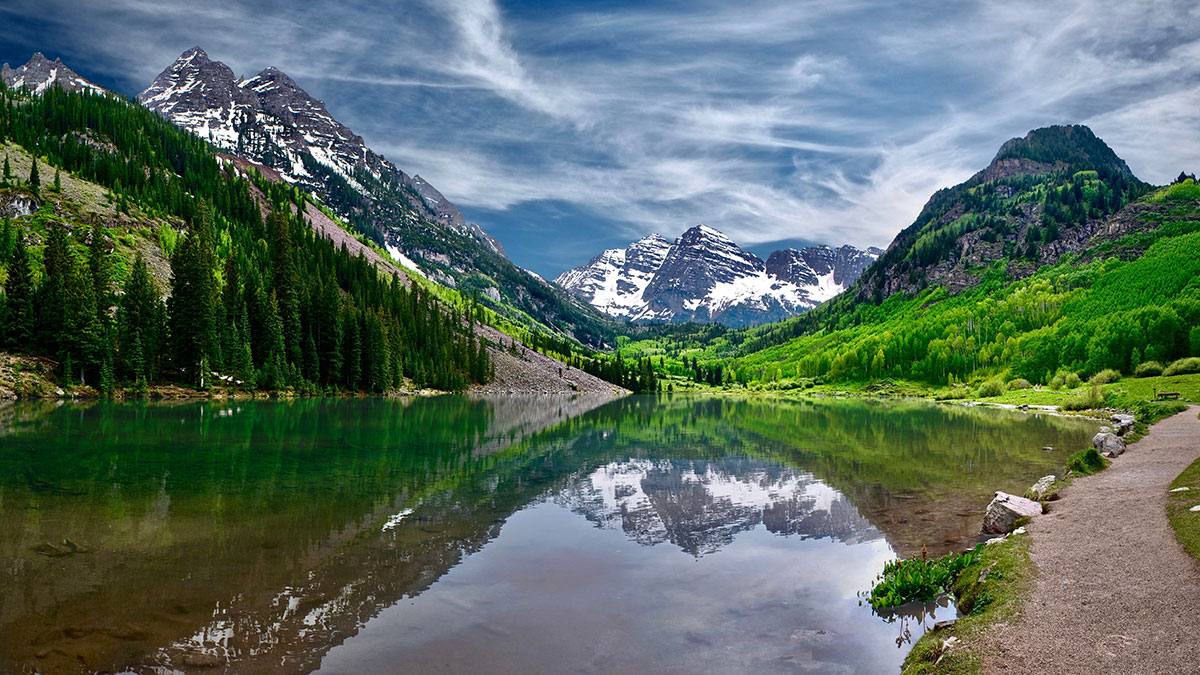 The word "Colorado" originates from Spanish, and means "colored". This is a reference to the colorful rock and sand formations of the river of the same name, flowing through the state, which is around 104,240 square miles in area and located in the southwestern U.S. The geographical highlight is, however, the Rocky Mountains, which reach to a height of more than 14,000 feet, thereby making Colorado the highest state in America.

With more than two dozen large ski areas, including world-famous locations such as Aspen and Vail, Colorado is by far the most important skiing region in the country. Natural experiences are not only available in the winter, however. In summer, and in the lower areas in particular, hikers, mountain bikers and rafting, riding and off-road fans will find everything they need.

Almost every municipality has trails into the surrounding mountains. The passages of the famous Colorado Trails, which cover the 465 miles from Durango to the capital city Denver through a fantastic high mountain landscape, are particularly fascinating. It is considerably flatter, on the other hand, to the east of the metropolis (population 550,000) - this is where the prairie begins.

Jack Nicholson, Michael Douglas, Cindy Crawford, Arnold Schwarzenegger and many more - the list of house owners and visitors to the high-class resort of Aspen reads like a "Who's Who" of Hollywood. This fashionable winter sport resort, lying at an altitude of around 7,900 feet on the Roaring Fork River, is also popular with foreign vacationers for one good reason: the legendary "Champagne Powder", the ideal snow for skiing.

Aspen was founded in 1879 by silver prospectors, who named the town after the aspen trees. The signs of the times were realized at an early stage, however, and the first ski lifts were already whirring their way up the slopes by 1937. In the meantime, winter sport enthusiasts can now curve, carve and board on four well-connected mountains. This 6,000-inhabitant town is not only busy on the ski slopes, but also in the shopping area around Cooper Avenue and Hyman Avenue - this in the summer as well. There is a good chance of seeing a "Promi" in the boutiques and high-class restaurants here.

Black Canyon of the Gunnison

At its deepest point, the Gunnison River has dug itself almost 2,700 feet deep into the dark, billion-year-old gneiss. At the narrowest point, these steep and predominantly black rock walls are only a few hundred yards apart. No other canyon in North America has such narrow gorges, steep walls and exciting depths as the Black Canyon of the Gunnison. This was acknowledged in 1999 by making the 47-square mile area into a National Park.

There are few roads into the gorge, but the South Rim Road starting from the Visitors Center opens up spectacular views over the fascinating steep walls and the black needles of rock. At the end of this road, a short footpath leads to Warner Point. There is also a four-hour descent behind the river. You should only attempt the more difficult trails with a Ranger, however, or you should obtain detailed information first. Information events are offered throughout the summer. This applies in particular to climbers and kayaks. Another exciting way to get to know the 12.5-mile gorge is on horseback.

To the east of Cañon City, a wild, gravel track leads to the former mining town of Cripple Creek, which developed into a real boomtown within a very short period in 1891 after the first gold nuggets were found in the area. The Cripple Creek District Museum in the old railway station illustrates the glory of this golden age, in which diggers extracted more than 600 tons of gold from the mountain slopes.

Unlike other "Gold Rush" towns that became ghost towns long ago, Cripple Creek has managed to stay alive. The reason: the brightly colored gambling casinos that have moved into the Victorian houses along Bennett Avenue. In addition to thousands of slot machines, the number of bars, restaurants and hotels has increased noticeably in the last few years. If you nevertheless want to experience something of the old times, you can descend into the Molly Kathleen Mine for 45 minutes in order to obtain your own impression of the working conditions in those days.

Denver, the capital city of Colorado, treats its visitors and its more than 550,000 inhabitants to plenty of sun, good museums, urban flair and marvelous leisure possibilities. Due to its altitude of more than 5,000 feet, Denver is also known as the "Mile-High City", and you do not have to travel very far to get even higher. The Rocky Mountains, rising to the west of the city with visible 14,000-foot peaks, can be reached very quickly.

It is not only clear from the legendary TV series Dynasty that the metropolis is a mecca for oil and power companies. A drive through the modern downtown, with its skyscraper skyline, confirms Denver's importance as a business location. Tourists come for other reasons, however. One of these is the Denver Art Museum, in which modern art and good Indian collections are exhibited. Other important sites in the city are the Museum of Nature and Science, in which the creation and the natural history of the Rocky Mountains are shown in an impressive manner, and the Colorado State Capitol. This granite building, with its 24-carat gold-plated dome and Corinthian columns, is a reminder of the days of the Gold Rush. The extensive Six Flags Elitch Gardens leisure park is a magnet for families, and is also located in downtown Denver.

The protected area on the border between Utah and Colorado comprises an area of around 330 square miles of rock wilderness with hardly a road. In addition to the canyons that have been dug into the sandstone to depths of up to 3,280 feet by the Green and Yampa rivers, the Dinosaur Quarry on state road 149 is the goal of many visitors. Literally dozens of dinosaur skeletons have been exposed on around 350 feet of rock wall, which has made this place the largest dinosaur graveyard in the world.

Although the area of the finds and the associated Visitors Center are very popular, the real attraction of the area is formed by the impressive gorges further north. The core area can only be reached by foot or by boat. This is, of course, particularly appreciated by nature lovers who prefer wild landscapes. Anyone arriving by car can choose from three approach roads. The most exciting of these are the Echo Park Road and the Yampa Bench Road, which require a four-wheel drive vehicle.

The Great Sand Dunes National Park in the south of Colorado has arisen in the course of thousands of years from sand grains that have been blown here from far away, and is the latest addition to the list of American National Parks. Nature has built up the largest dunes in America here, some up to 650 feet high. Depending on the light, they appear yellow or white. The best view, however, is the contrast with the snow-covered, steeply climbing Rocky Mountains in the background.

New sand is continually being accumulated from the south by the winds coming from the San Luis Valley. The material collects in this corner of the valley because the air has to rise over the Medano Pass from here. In the summer, there is a trail over the pass for four-wheel drive vehicles, which can, however, be very difficult, particularly on the lower part. Hikers interested in dune walking will look in vain for marked hiking trails, as the sand landscape of this 40-square mile National Park is continually changing.

Mesa Verde, or the "Green Table", is what the Spanish explorers called the 1,950-foot-high mesa (flat-topped mountain) in the extreme southwest of Colorado. However, the real sensation was only discovered in 1880. Large ruined sites, some of them multi-storied, so-called Cliff Dwellings, had been built into the steep cliffs of the canyons by prehistoric Indians.

In the mean time, several thousand individual ruins have been discovered on Mesa Verde by archaeologists. Reason enough for UNESCO to add the 82-square mile National Park to its list of World Heritage sites, as the most impressive ruined city from pre-Columbian times in North America. The largest residential building in the National Park is the Cliff Palace, with more than 200 rooms and 23 kivas (cult chambers) and the Spruce Tree House, with 114 rooms and eight kivas. The facilities of the National Park also include two museums that show the life and the art of the ancient Indian Anasazi culture. Researchers believe that the earliest inhabitants of Mesa Verde lived there from 100 to around 700 A.D.

Wide, U-shaped valleys, sheer mountain faces, crystal-clear lakes and countless 13,000- and 14,000-foot peaks dominate the scenery of the almost 425-square mile National Park, located about an hour by car from the city of Boulder. The 50-mile long Trail Ridge Road from Eastern Park to Grand Lake is truly breathtaking. It winds its way through the three ecosystems at an altitude of around 12,190 feet, and is thereby the highest continuously-paved road in North America.

It is one of the few roads in this terrain that benefits the plant and animal world. In the lower area above all, the largely wild forests of ponderosa pine and Douglas fir provide a protected home for a rich animal world. The large herds of Wapiti deer and thick-horn sheep are well worth mentioning. The inhabitants of the national park, which was founded in 1915, also include black bears, coyotes and golden eagles. Anyone traveling along the more than 375 miles of hiking trails, and stopping at one of the few camping and picnic places, can expect encounters with four-legged "friends".

On June 4th, PLL LOT Launched Next Non-Stop Connection Between Poland and the U.S.
Florida - the Number One Tourist Destination in the US
Cayman Islands - a Tax Paradise and Booming Banking Industry
Los Angeles - City of Angels
Dublin - Friendly and Relaxed City
Cape Town - The Most Beautiful City in the World
California - The Sunshine State
Boston - "Athens of America"
Bermuda - Where Everything Screams "Holiday"
SEE MORE