Barcelona - Unique Blend of the Traditional and the Modern 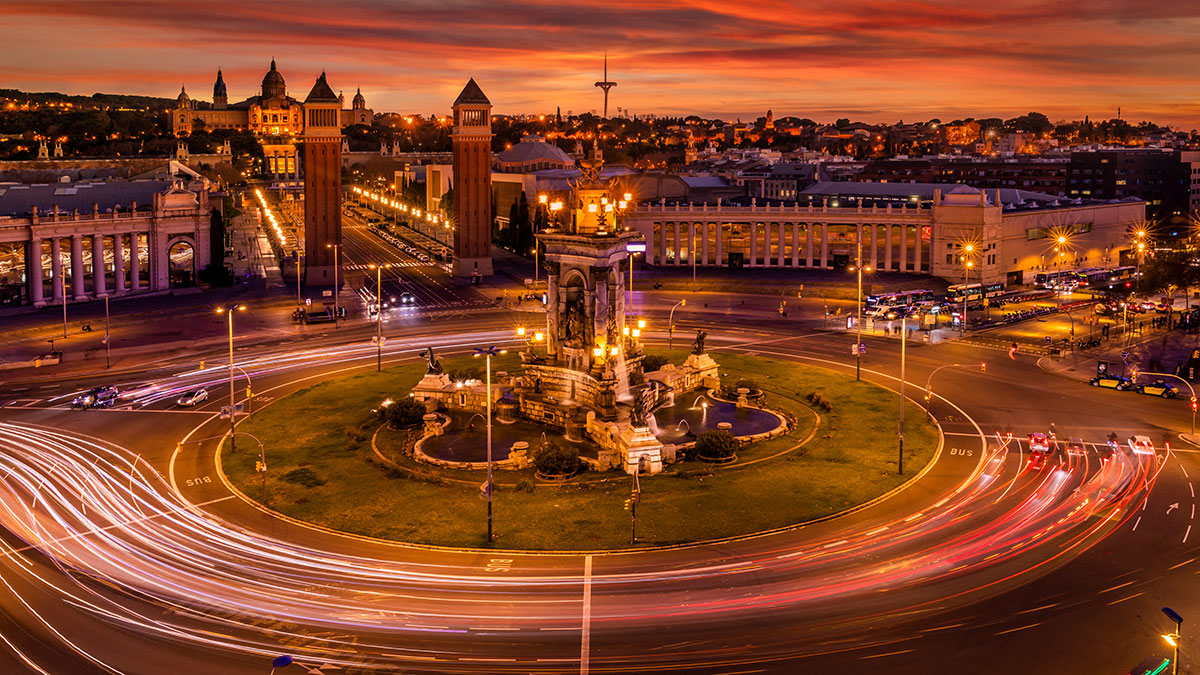 Barcelona's unique blend of the traditional and the modern fascinates over 4 million tourists every year. The old town features picturesque Gothic churches and narrow, winding streets as well as playful buildings constructed in a wide range of styles and materials.

It is a cosmopolitan trading center where modernist architecture has flourished like nowhere else, thanks to the world-famous architect Antoni Gaudí. The Catalan metropolis is also a city of fashion and design, with numerous publishing houses and excellent art museums and galleries. A wide range of different foods and cuisines are also available.

The Pretty One (“La Guapa”), as the city is lovingly known by its inhabitants, also has a range of entertainment options up its sleeve: shops and bars on the famous Las Ramblas, an amusement park on the Tibidabo, massive cinema complexes, and theater and concert stages in the parts of the old town which remain lively into the wee small hours.

Narrow, winding streets, atmospheric squares and a high concentration of magnificent buildings all lend the Gothic Quarter, the oldest part of the city, its character and charm. The town hall and the seat of the Catalan government, the latter an excellent example of Gothic and Renaissance style with its beautiful inner courtyards, face each other across the Plaça de Sant Jaume, which was once a Roman forum. Despite its colorful windows, the interior of the Gothic cathedral (La Seu) feels almost bathed in darkness. The Neo-Gothic façade was only completed in the 19th century, and the octagonal central tower was not finished until 1913.

The crypt under the high altar houses a marble sarcophagus containing the remains of Santa Eulàlia, the city’s patron saint. Geese are traditionally kept in the cloisters to ward off thieves. The Palau Reial Major, from which a broad flight of steps leads down to the Plaça del Rei, was once the home of the Counts of Barcelona and later the Kings of Aragón. It was in the Saló del Tinell, a magnificently vaulted throne room almost 120 feet long by 60 feet wide, that the Inquisition judged whether people should live or die, and that in 1493 Christopher Columbus told the Catholic kings about the New World.

For the 1992 Olympic Games, the entire waterfront area and the promenade all the way up to the fishing district, Barceloneta, were completely redesigned. The boats known as “Golondrines” set off on their tours around the harbor from the Moll de les Drassanes near the Monument a Colom, from the top of which you can see the whole coastline. The Rambla de Mar footbridge takes you to the Maremàgnum on the Moll d’Espanya jetty – a shopping and leisure center incorporating fashionable bars, tempting gaming rooms, wonderful shops and an IMAX cinema to take you to faraway worlds.

It is also home to the Aquarium, with an 260-foot Plexiglas tunnel where you can come face to face with moray eels and tiger sharks. The Aquarium also has 21 huge tanks and more than 4,000 different species of animals and plants, making it the largest artificial underwater world in Europe. Accompanied by classical music, the visitor can learn about marine life in an entertaining way.

The 700-foot high Montjuïc to the south of the city center is one of two mountains in Barcelona, the other being Tibidabo. Avant-garde architects created the sports facilities for the 1992 Olympic Games on the plateau of the mountain by converting and adding to what was already there. Notable additions included the swimming stadium, the Olympic stadium and the Palau Sant Jordi. The Poble Español (”Spanish Village”) had already been built for the World's Fair in 1929. This leisure park, with restaurants and craft shops, also contains scaled-down copies of the country's main tourist attractions, including the town wall of Ávila, palaces in the Basque Country and houses in Aragón.

The futuristic Pavelló Mies van der Rohe was probably too far ahead of its time, and was torn down right after the Fair, only to be rebuilt in 1986 as a masterpiece of modern architecture. It is a work in the German Bauhaus style, characterized by its transparency, simple lines and cool feel. In the Fundació Joan Miró museum and study center, sculptures, textiles, paintings and drawings by the Barcelona-born artist are exhibited in airy rooms.

The Museu Nacional d’Art de Catalunya (MNAC) is housed in what was originally the Spanish Pavilion for the 1929 World's Fair. Since 1934, the museum has been home to one of the most precious collections of medieval European art: paintings, board games, painted wooden ceilings, sculptures, altarpieces and chests.

Among the highlights are the original Romanesque murals from churches and monasteries in remote Pyrenean valleys, which justify the MNAC’s fame around the world, including 'David and Goliath' and 'Christ as Lord of the World' from Taüll. The Gothic section is stunning, with an extensive collection of quality panel paintings. Since 1997, the ground floor has housed the private collection of the Catalan politician Francesc Cambó, and features works by Lucas Cranach, Tiepolo, Tintoretto, Goya and Titian.

The city’s most elegant street, which is home to some excellent buildings in the modernist style, is Passeig de Gràcia, right in the heart of the Quadrat d’Or (“Golden Square”). Artistically decorated streetlights, intricate mosaics on the pavement and expensive shops are all indicative of the exclusivity of the people of Barcelona at the beginning of the 20th century, and of their need for recognition. Some excellent examples of the Catalan variation on Art Nouveau can be seen in the collection of houses known as the Mançana de la Discòrdia (“Discord Block”) between Carrer Consell de Cent and Carrer Aragó: a typical mixture of Neo-Gothic, Italian, Flemish and traditional Catalan elements can be seen at Casa Amatller (no. 41), Puig i Cadafalch.

Domènech i Montaner designed Casa Lleó Morera (no. 35), with its simple external lines and windows adorned with columns. The bone-like shapes and scaly roof of Casa Batlló (no. 43), designed by Antoni Gaudí, serve as a reminder of the dragon slain by St. George, the patron saint of Catalonia. The last apartment block ever designed by Gaudí, Casa Milà (no. 92), is known by the locals as La Pedrera, or ”the quarry”, because of its sculptured façade.

Las Ramblas is one of the most famous streets in Spain, where young and old, locals and tourists alike meet to chat or simply to sit and watch the world go by. The street stretches out over nearly three-quarters of a mile, and is lined with flower stalls, street theater, bars, musicians, monuments, magicians, painters, kiosks, restaurants and much, much more. Not far from the Plaça de Catalunya, a busy square with neoclassical façades, is the Palau Moià, a citizens' palace dating back to the 18th century, with murals by the Catalan painter Francesc Pla in the main hall. La Boqueria (“the chasm”) is well worth a visit – this is the most famous market in Barcelona for fruit, vegetables and seafood.

The 18th-century Palau de la Virreina, which was built by a Peruvian viceroy for his wife, is now used for special exhibitions. The Gran Teatre del Liceu, built in the middle of the 19th century, is now one of the top opera and ballet houses in the world; it was reopened in 1999 after a major fire. Albert Einstein and Marilyn Monroe are just two of the 300 famous and infamous personalities on display at the Museu de Cera, an excellent waxworks museum.

One of Barcelona's most famous landmarks is the Templo de la Sagrada Família (“Church of the Holy Family”), to which Antoni Gaudí dedicated the last 16 years of his life, without ever completing it. In 1883, the 31-year old architect took over the monumental building project, which was financed by private donors and was designed to hold up to 15,000 people once it was complete. According to Gaudí’s plans, there was to be a five-aisle basilica with a three-aisle transept, topped by a total of seventeen 350-foot tapering steeples. To date, only four of these towers, the ones above the east and west portals, have been completed.

The building was designed as a “church for the poor” and, as with his other works, the architect was inspired by nature with its soft, rounded and flowing forms, and therefore decided to dispense with flying buttresses and supporting pillars. From the top of the Barnabas tower, which you reach by elevator or by climbing a seemingly endless spiral staircase, there is a spectacular view over the rooftops of the city.

The 745-foot high Tibidabo is also known as the "Muntanya Màgica" ("Magic Mountain") and is very popular with the locals, especially on weekends. The Tramvia Blau is a nostalgic tram line built at the end of the 19th century. It goes past some charming Art Nouveau villas halfway up the mountain, where the funicular railway continues the journey to the very top. Visitors flock to the numerous picnic sites and to the Parc d'Atraccions. You can easily spend a whole day at the amusement park, with its Ferris wheel, roller coaster, merry-go-rounds, snack bars, miniature railway and much, much more.

Work on the magnificent neo-Romantic El Sagrat Cor de Jesús church, which is built right on the very peak of the mountain and topped by a gigantic figure of Christ, was not completed until 1952. The top of the tower, like the top of the nearby 843-foot radio tower Torre de Collserola, offers a magnificent view down over Barcelona: the rooftops of the city, the Mediterranean to the east and Montjuïc to the south.

In 1900, Eusebi Güell i Bacigalupi commissioned his friend Antoni Gaudí to design and build the garden city of Parc Güell – which was to become Gaudí’s most colorful architectural creation. The park is very extensive, so it is easy to escape the hordes of people around the famous buildings. Colorful shards of tile and ceramic have been used to produce countless imaginative mosaics on the roofs of the pavilions, adding an eccentric charm to the whole park.

The real attraction is the Plaça de la Naturlesa – a huge terrace with a spectacular view down to the harbor. The sides of the square are lined with the famous snake bench. In the “Hundred Column Hall” below, many street musicians make the most of the excellent acoustics of the open hall. If you wander through the complex, you come across idyllic little arcades and, at the foot of the hill, the Gaudí Museum. This is where the artist lived for nearly 20 years, and in the church-like building, you can still admire today the extravagance and playfulness of the architect in many little details.

Some 40 miles northwest of Barcelona, the rugged chalk cliffs of the Sierra de Montserrat (national park) tower over the Santa Maria Monastery, a national shrine for the Catalan people. As early as the Middle Ages, it developed into an important pilgrimage site after the legendary discovery of a statue of the Virgin Mary, and even today more than 750,000 believers every year still flock to see the “Moreneta” (“Black Madonna”), a foot-high figure of the Madonna and baby Jesus wrapped in a golden cloth. In 1808, Napoleon's troops burned nearly the whole place to the ground, and all that survived were the Romanesque church portal and the Gothic cloisters. But the entire monastery was rebuilt some 50 years later.

It is an important Benedictine monastery which became a center of the Renaixença – the rediscovery of the Catalan culture – during the 19th century. As well as the church, the printworks, goldsmiths' workshop and the library are all worth seeing. And no visitor should leave without trying the homemade cheese, honey and herb liqueur, known as ”Aromes de Montserrat”, sold by the monks.