Amsterdam is All About Joie de Vivre, Tolerance and Fun 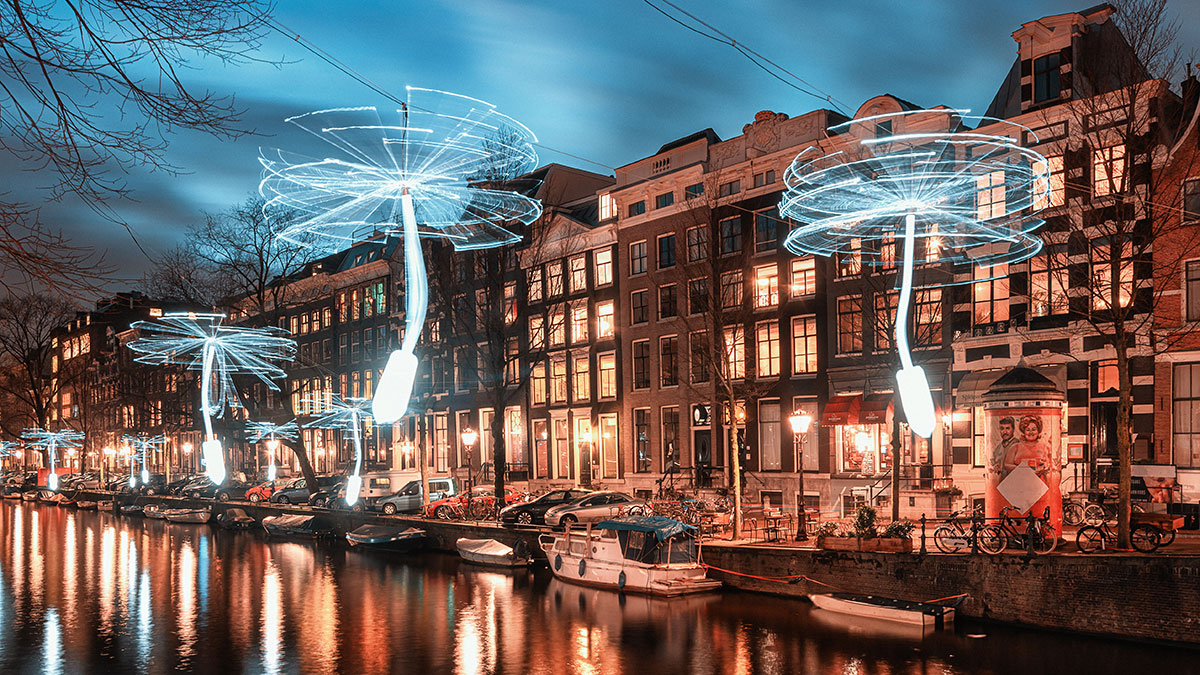 Light Festival Amsterdam, Wind driven propellers in white light above the Herengracht in the old town of Amsterdam. Foto: Julia

But this is certainly not all the bustling city has to offer - elegant townhouses, historic buildings and world-class museums entice those interested in art and culture from all over the world to the small metropolis on the Amstel River.

Boat trips along romantic canals and the famous "kopje koffie" in one of the cozy cafés are ideal ways to take a relaxing break from sightseeing. Anybody who spends a few days in this cosmopolitan city, with its village feel, will not easily forget their stay here and will always be happy to return to discover more.

Business people cycling along on rickety bikes are just as much a part of the street scene as Caribbean markets, off-the-wall boutiques and little junk shops. Amsterdam lives up to all the clichés but still manages to preserve its own special ambience.

Every day, long lines form in front of the entrance to no. 263, the old canal house which is one of Amsterdam's best-known and most visited museums. It was here that Anne Frank and her family hid from the Nazis for two years, until in 1944 she was discovered and transported to Bergen-Belsen concentration camp. The difficulties of surviving in a very small space, completely cut off from the outside world, were recorded by the 14-year-old in her diary, which has since been translated into 53 languages and is one of the most heart-rending testimonies to the persecution of the Jews in Nazi-occupied Europe.

Even today, visitors enter the hiding place at the back of the house through a door (disguised as a cupboard) from the former offices and storerooms. The fittings have been preserved in their original condition. The front of the house was restored in 1957, and contains informational material and also various displays covering the course of World War II.

The dam which separates the Amstel River from the IJ Canal and which gave the city its name is no longer the geographical center of the Dutch metropolis, but it is still its focal point. In particular, the 72-foot high National Monument in the middle of the cobbled square is a favorite meeting point for locals and tourists alike.

With 11 urns (each filled with earth from one of the provinces of the Netherlands) built into the monument, it is a memorial to the liberation from German occupation during World War II. Opposite it stands the Royal Palace, which was designed as a representative town hall by Jacob van Campen between 1648 and 1655 and sits on top of 13,659 supporting piles. The strictly-classical structure, with its magnificent interior decoration, still serves the Royal Family today as a city residence on special occasions. Especially worth seeing is the Empire furniture with which Louis Bonaparte had the palace furnished.

The Jordaan is characterized by cozy pubs and cafés, way-out boutiques, and esoteric shops and galleries in which absolutely everything is sold, from art to kitsch. In particular, Amsterdam's alternative scene has settled into the city's former working-class and immigrant quarter. Apart from the Westerkerk and Anne Frank's House, there are few sites of historical interest to see but, on the other hand, it is the ideal place to find out-of-the-ordinary presents or simply to stroll through the narrow streets and alleyways.

Attractive courtyards, lovingly tended gardens and cats snoozing peacefully in shop windows complete the idyllic scene. This part of the city was completely renovated about 20 years ago. At the time, the Jordaan was threatening to sink into the ground because of rotten foundations.

Even if you don't want to buy anything, you should still take the escalator to the fourth-floor gallery of the fine Magna Plaza shopping arcade and stroll through the many shops. Stamps are no longer sold behind the neo-Gothic façade of the former Central Post Office, it is now home to expensive men's fashions, chic accessories, gifts and unusual stationery.

And when you are worn out from all that browsing, you can sit down and relax in one of the two pleasant cafés over a snack or a "kopje koffie".

Year after year, Rembrandt's 'Night Watch', behind its protective screen of reinforced glass, attracts more than a million art lovers from all over the world into the neo-classical brick building in the center of the museum district. Founded by Louis Bonaparte in 1808, the Rijksmuseum now contains not only the world's largest and most important collection of 17th-century Dutch paintings, but also sculptures and valuable craftwork exhibits.

Until around 2008, the museum galleries will be undergoing gradual renovation. Many of the world-famous works have therefore been moved into the Philips wing or to other museums. For up-to-date information on the progress of the renovation work, see the museum website.

In 1973, the world's greatest collection of works by the famous Dutch impressionist found a home in a white building of curving walls, designed by Gerrit Rietveld. In addition to some 200 paintings, 500 drawings, and watercolors by the master, the exchange of letters between the artist and his brother Theo is also on display here.

Long lines form in front of the paintings all year round, but anybody who stands in front of the early 'Potato Eaters' or the world-famous 'Sunflowers' will regard the time as well-spent. Space has also been made for other painters contemporary with Van Gogh, so the visitor can also admire works by Henri de Toulouse-Lautrec, Paul Gauguin and Monticelli.

Located close to the museum district, Vondelpark, with its 110 acres, offers an ideal recreational area for all those who need a break from art and culture. Here, in what was once the heart of the European hippie movement, you can lie down on the grass, unwrap your picnic food, jog, cycle or even ride a horse.

Music festivals, concerts and theater performances are organized here in the summer months, and the many entertainers and artists in the small cafés make time go by in a flash. If you are looking for a bit of peace and quiet, you can stroll along idyllic pathways past pools, pavilions and rose beds while listening to the birds singing in the woods.

Even if you don't want to buy any batik clothes, leather goods or silver jewelry, on no account should you miss Amsterdam's largest and most beautiful flea market, located in Waterlooplein (Waterloo Square). Every day, stall-holders and shopkeepers try to sell their colorful and chaotic mixture of useful items, bric-a-brac and second-hand clothes around the modern Stadhuis (Town Hall), with its eye-catching red and white façade. The Normaal-Amsterdam-Peil, a calibration post, is placed here at ground level. This is the zero point from which heights are calculated in virtually every country in Europe.

Immediately beside it you can see the current sea level in three glass columns, and you will see that without its protective dykes, at normal sea level Amsterdam would be flooded.

On June 4th, PLL LOT Launched Next Non-Stop Connection Between Poland and the U.S.
Florida - the Number One Tourist Destination in the US
Cayman Islands - a Tax Paradise and Booming Banking Industry
Los Angeles - City of Angels
Dublin - Friendly and Relaxed City
Colorado - the Highest State in America
Cape Town - The Most Beautiful City in the World
California - The Sunshine State
Boston - "Athens of America"
SEE MORE