The Polish Understanding of Independence. Meeting with Polish Historians 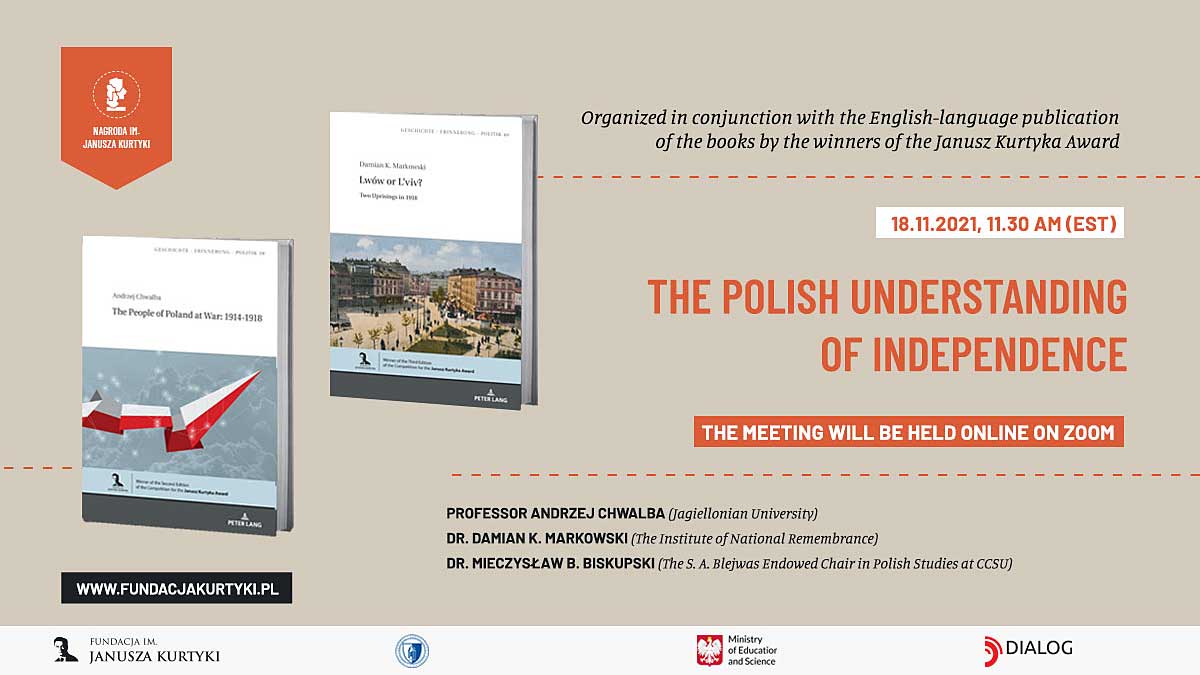 The S. A. Blejwas Endowed Chair in Polish Studies at CCSU and the Janusz Kurtyka Foundation present a meeting with Polish historians Professor Andrzej Chwalba and Dr. Damian K. Markowski, entitled The Polish Understanding of Independence. The meeting will be held online on Zoom on November 18, 2021, at 11.30 am. (EST).

The meeting is open to the public and admission is free.
Zoom Link to the meeting: https://bit.ly/3n92bmV

The Janusz Kurtyka Award and the project

The two books presented during the meeting won the Janusz Kurtyka Award in 2018 and 2019 respectively. The aim of the Competition for the Janusz Kurtyka Award is to select and highlight the year’s best Polish scholarship in the humanities or social sciences. The award-winning books should contribute to the commemoration and nurturing of Polish culture and history, and, most crucially, disseminate knowledge about the history of Poland abroad. The winning book is translated into foreign languages and distributed abroad.

The meetings and the Award are part of a larger project entitled Internationalization of Polish historiography and dissemination of the recognition of Polish scholarly achievements by enhancing readers’ accessibility through translation and promotion of the best books [2019-2020], conducted by the Janusz Kurtyka Foundation and financed by the Ministry of Education and Science of the Republic of Poland. The project combines several of the Foundation’s activities connected with its fundamental initiative as developed in the Janusz Kurtyka Award.

During World War I Poland, at the time partitioned and under Prussian, Austrian and Russian rule, was not an independent state; however. as it was divided up between the belligerent powers, its territory was in the middle of the conflict. Professor Chwalba’s book presents an integral history of the Polish lands during World War I. However, its narrative is presented in the new, non-classical perspective of historical anthropology. The image of history Professor Chwalba offers is a panorama in which political, military, and economic problems serve only as a background for the history of individual lives. He describes the drama of daily life during the Great War with various military fronts crisscrossing Poland and uses this backdrop to analyze key issues such as demography, health, the demoralization of society, transport and communications, and the social activity of women, supplementing this outlook on Polish history with a view from the perspective of the occupying powers as well as with the effort the Polish people made worldwide to restore their country’s independence. World War I was a conflict that toppled empires, thereby offering Poland a chance to recover its freedom.

In the aftermath of World War I, the freedom of the Poles and other ethno-national groups that had lived under the rule of former Central and East European empires was within arms’ reach. However, they still had to fight for this freedom against each other. That’s what happened in L’viv, where the struggle between Poles and Ukrainians erupted in November 1918. The book Lwów or L’viv? Two Uprisings in 1918 by Dr. Damian K. Markowski brings an absolutely unique, triple perspective on the battles for L’viv in November 1918, which consists of the Polish, Ukrainian and Jewish narratives about the conflict, giving a signal portrait of multi-ethnicity in an age of conflict. Markowski utilizes a wide range of sources, archives, and libraries to present the battles in an objective manner. His book explores the complex Polish-Ukrainian and Polish-Jewish relations, and to a certain extent also considers the 20th-century Ukrainian-Jewish relations and looks at L’viv as a city. Thanks to his literary talent, the book has an interesting composition, presenting readers with an intriguing story well worth reading.

Professor Andrzej Chwalba is an eminent Polish historian and researcher of social, cultural, and political history. He is head of the Historical Anthropology Department at the Jagiellonian University, specializing in the social and anthropological history of World War I and World War II, Polish-Russian relations, and the history of Kraków. He is a member of the editorial staff of a number of scholarly journals and research boards such as the Council of the Museum of World War II and the Museum of Polish History. He has authored over 20 books, many of which have been published in foreign languages (Bulgarian, Croatian, Czech, English and German). Winner of the First Prize of the Oskar Halecki Historical Book of the Year Competition and of the Second Edition of the Competition for the Janusz Kurtyka Award for his book Wielka Wojna Polaków 1914-1918 (English edition: The People of Poland at War: 1914-1918).

Dr. Damian K. Markowski represents the younger generation of Polish historians and one of the few Polish researchers in the group of specialists in the history of Eastern Europe and the former Polish Eastern Borderlands. He received his Ph.D. from the Institute of History of the University of Warsaw. He has taken part in numerous international conferences on history and has authored several academic papers and over a hundred general interest articles and reviews. He has been a research fellow of the Ministry of Science and Higher Education of the Republic of Poland and has received a research grant from the Center for Urban History of East Central Europe and the Polish Aid Foundation Trust in London. He is on the staff of the Office for Commemorating the Struggle and Martyrdom at the Institute of National Remembrance. Dr. Markowski is the prizewinner of the Third Edition of the Competition for the Janusz Kurtyka Award, for his book Dwa powstania. Bitwa o Lwów 1918 (English edition: Lwów or L’viv? Two Uprisings in 1918).