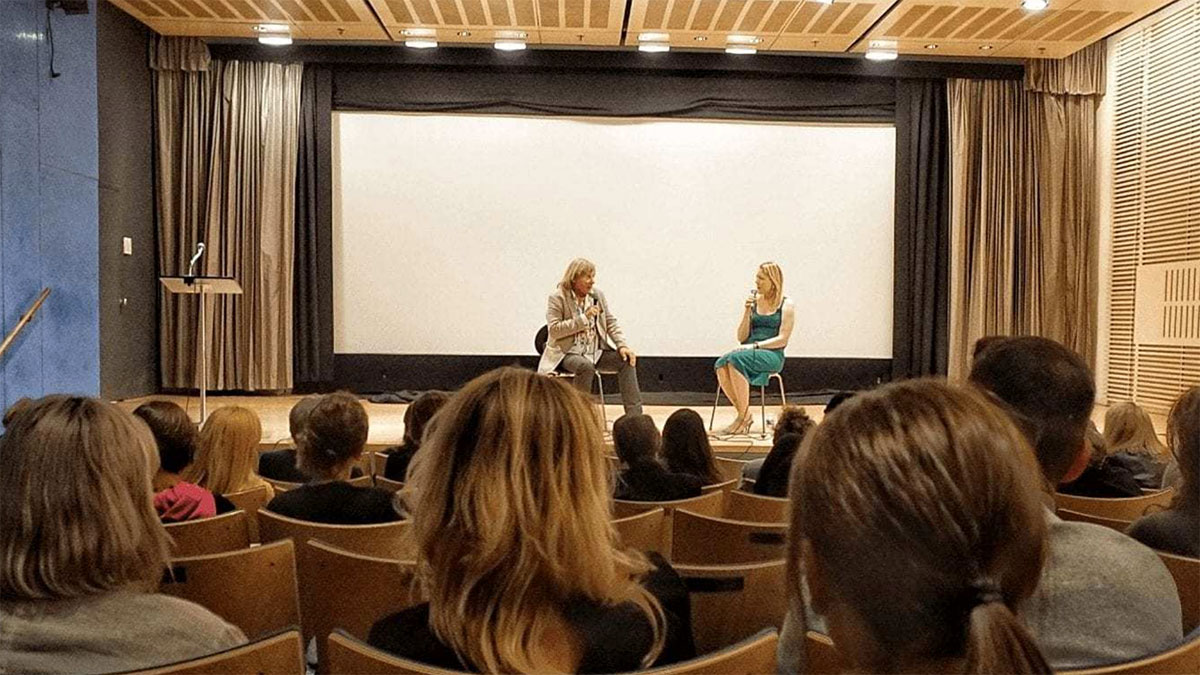 On May 26th, the NYPFF will present Poland’s 2021 Academy Award submission NEVER GONNA SNOW AGAIN as an opening night selection with directors Małgorzata Szumowska and Michał Englert in person. Additional festival highlights include a special screening of Agnieszka Holland’s CHARLATAN with a new introduction by the celebrated filmmaker, Viennale FIPRESCI award-winner Mariusz Wilczyński’s hand-drawn fourteen years in the making animated wonder KILL IT AND LEAVE THIS TOWN featuring the voice of famed director Andrzei Wajda and the New York premieres of Cannes selection SWEAT by filmmaker Magnus von Horn and Jacek Bromski’s SOLID GOLD with actress Katarzyna Śmiechowicz in person.

“We are delighted to return to experiencing the magic of the big screen's shared emotions and discussing our discoveries together,” says festival director Hanna Hartowicz.

ALL FOR MY MOTHER (Wszystko dla mojej matki)
Directed by Małgorzata Imielska, 2019, 103 min.
Polish Film Festival Winner, Best Actress
Warsaw Film Festival Audience Winner
17 year old orphan Olka (Zofia Domalik), does not care for the other girls in the reformatory, nor the promise of new clothes, phones, and money from the corrupt guards. Olka only wants to find her mother, and she will escape from every institution until they meet. Małgorzata Imielska’s “All For My Mother” is a searing portrait of modern day Poland, and a stunning debut.

CORPUS CHRISTI (Boże Ciało)
Directed by Jan Komasa, 2019, 116 min.
Academy Award Nominee Best International Feature Film
Polish Film Festival, Best Director Winner
Bartosz Bielenia smolders in a wild performance pitting forgiveness against vengeance amongst the faithful. When a newly paroled convict (Bielenia), arrives for work at a saw mill, he is mistaken for a priest and decides to take over a country church.

KILL IT AND LEAVE THIS TOWN (Zabij to i wyjedź z tego miasta)
Directed by Mariusz Wilczyński, 2020, 88 min.
Polish Film Festival 2020, Golden Lions Winner Best Film
Winner of the Grand Prize for Feature Animation, Ottawa International Animation Festival Viennale FIPRESCI Award winner
Fleeing from despair after losing those dearest to him, the film's hero hides in a safe land of memories where time stands still and those dear to him are still alive. Fourteen years in the making, director Wilczyński’s deeply personal, hand-drawn Łódź set animated film is voiced by an ensemble cast that includes famed director Andrzei Wajda and scored with blues songs by the late Tadeusz Nalepa.

New York Premiere
SOLID GOLD
Directed by Jacek Bromski, 2019, 135 min.
Actress Katarzyna Śmiechowicz in person
Top crime detective Nowicki (Janusz Gajos) enlists outsider Kaja (Marta Nieradkiewicz) to go undercover and expose businessman Kawecki (Andrzej Seweryn) for the mafia boss he is. As Nowicki and Kaja move through the elite world of politics and power like knives, Kawaicki decides he must pull them even closer to survive in this explosive thriller.

SUPERNOVA
Directed by Bartosz Kruhlik, 2019, 78 min.
Polish Film Festival award winner for debut or second film
Told in a realistic style, this is a universal story about a few hours in the life of a village community. SUPERNOVA is an observation of a person placed in a critical situation, and it poses a question about the fundamental nature of coincidence and destiny. A vibrant story that moves between drama, thriller and a disaster film.

New York Premiere
SWEAT
Directed by Magnus von Horn, 2020, 106 min.
Cannes 2020 Official Selection
Fitness model Sylwia Zając’s presence on social media has made her a celebrity, but not everyone following has good intentions in this finely taut thriller about the dangers and pleasures of social media. 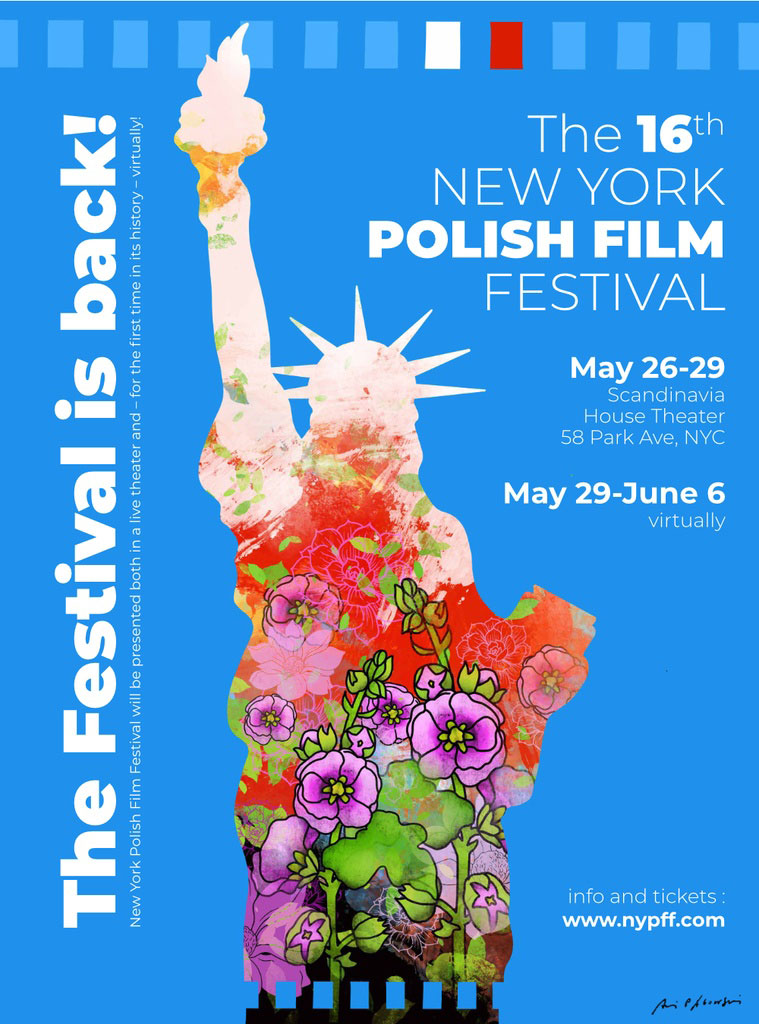 NYPFF’s jury will award this year’s Krzysztof Kieslowski Beyond Borders Award embodying the deeply humanistic commitment so characteristic of Kieslowski’s work, the Elzbieta Czyzewska Award and the The Special Jury Award. 2021 jury members include: jury president- Stacy Keach, Veronica K. Hartowicz, Martyna Majok, Kama Royz, Cezary Skubiszewski and Ewa Zadrzynska-Głowacka.
NYPFF 2021’s poster is designed by Andrzej Pągowski (born 1953 in Warsaw) is a Polish artist who specializes in graphic design and poster art. Pągowski graduated from The State University of Fine Arts in Poznan in 1978 and began to design posters, which has since become his main interest. In addition to posters, he designs theatrical settings, prints and catalogues. One of the younger of the Third Generation of artists of Polish School of Posters, he easily made the transition from socialism to capitalism; in 1990, he created his own graphic studio, STUDIO P, which developed into an advertising agency in 1993 and continues in operation today. His art can be found in many European museums as well as the Museum of Modern Art in New York. He has also had one-man shows in Stockholm, Paris, London, and Warsaw.
NYPFF 2021 is presented with the co-financing support of the Association of Polish Filmmakers and the Polish Film Institute. Sponsors include Sigmund A. Rolat, Consulate of Poland in NY, Polish Cultural Institute NY, Zywiec, The Kosciuszko Foundation and the Polish and the Slavic Federal Credit Union. Supporters include the Polish Theater Institute, Czech Center New York and Grace Grochowski - Complete Physical Therapy