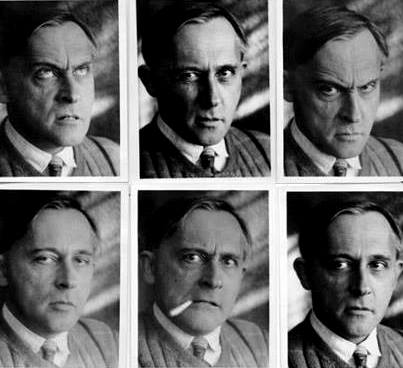 Coffeehouse Chronicle #153 will focus on the work of turn-of-the-century Polish avant-garde playwright Stanisław Ignacy Witkiewicz’s (1885 –1939), known as "Witkacy," who may well have been Europe's most radical novelist, dramatist, painter, and philosopher in an era when artists competed fiercely to break away from all that had come before. Writing in Polish and banned in Communist Poland, while he may not have attained the international attention of the Surrealists, Dadaists, or other Absurdists, his work remains a striking example of modernism.

Witkacy wrote over 30 plays between 1918 and his suicide in 1939. Despite his productivity, he was practically ignored in his time and left behind no direct disciples, yet has gone on to mysteriously stir up more excitement among young playwrights than practically any other 20th-century writer, even Eugene O'Neill. His influence is perhaps magnified by the enthusiasm of European scholars, but his status as progenitor of the Avant Garde is undeniable. His plays were rediscovered in the 1950s and 1960s and hailed as precursors of the European theatrical movement known as the Theater of the Absurd. Witkiewicz is known for his outrageously extravagant scenes influenced by all kinds of occultisms and philosophical speculations.

The afternoon will also include a celebration of GC CUNY’s Segal Theatre Center’s most ambitious publishing project so far: four volumes of Stanisław Ignacy Witkiewicz’s Collected Plays. The anthology represents the very first complete edition of his 23 extant plays in English translation, including The Madman and the Nun, The Crazy Locomotive, The Water Hen, The Shoemaker, They, The Pragmatists, Tumor Brainiowicz, Gyubal Wahazar, The Anonymous Work, The Cuttlefish, The Beelzebub Sonata, and others. The anthology was produced by the Martin E. Segal Theatre Center in close collaboration with the Adam Mickiewicz Institute in Warsaw and it’s Director of Theatre and Dance Programs Joanna Klass.

Coffeehouse Chronicles is an educational performance series exploring the history and development of Off-Off Broadway from its inception within the Village “Coffeehouse Theatres” of the 1960s through today. Part artist portrait, part creative event, part history lesson, part community forum, it is our mission to provide a home, as did our founder Ellen Stewart, for personal and intimate engagement with art. Since 2005, La MaMa has presented more than 150 Coffeehouse Chronicles, building on our mission to provide a home for personal engagement with art. Coffeehouse Chronicles are held on one Saturday each month (September through June).

This edition of Coffeehouse Chronicles will be FREE of charge to audiences thanks to the generous support of The Polish Cultural Institute.

Installation and service of solar batteries in New York - PR Data Electric & Services The Four Pillars of Your Health Treating Depression with Botulinum Toxin Special For 2021 Wedding & Social Parties at Russo’s on the Bay in New York Unique Technique of Ozone Therapy COVID-19 Country-Specific Information from U.S. Embassy and Consulate in Poland Support the Resolution to Commemorate Soldiers and Civilians Who Were Murdered by the NKVD at the Katyn Forest
read more