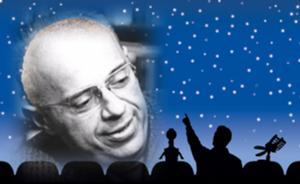 STANISLAW LEM AND THE ART OF ADAPTATION presented by Columbia University Department of Slavic Languages, the East Central European Center, the Harriman Institute, and the Polish Cultural Institute

Please join the Columbia University Department of Slavic Languages, the East Central European Center, the Harriman Institute, and the Polish Cultural Institute for a panel presentation and discussion of screen adaptations of the work of Polish science-fiction grandmaster Stanislaw Lem (1921-2006).

The panel is held in conjunction with the Anthology Film Archives series Stanislaw Lem on Film, running from Nov. 1-11, and features presenters Michael Kandel, award-winning translator and longtime interlocutor of Stanislaw Lem; Christopher Caes, Lecturer in Polish at Columbia University; and Ezra Glinter, independent writer, editor, translator and Lem connoisseur. While Russian filmmaker Andrei Tarkovsky's luminous Solaris (1972) stands as the best known film version of the Polish writers work, Lem, over the course of his nearly 60-year career and beyond, has also served as a source of inspiration for short and long works on both the television and cinema screens on multiple occasions, from the 1959 East European adaption of his debut novel Astronauts (1951) as The Silent Star (AKA First Spaceship on Venus) to Israeli director Ari Folman's recent, partially animated reimagining of The Futurological Congress (1971) as The Congress (2013).

The panel will reflect on the challenges Lem's fiction presents for film adaptation, on the often thorny relationships Lem had with his translators and adapters, and on the insights into his thought and fiction made possible by adaptation for the screen.