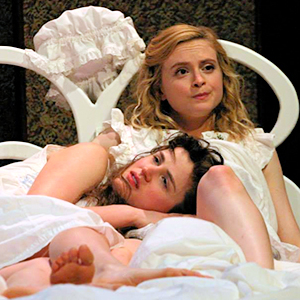 The magical “tragic farce” by one of Poland’s greatest contemporary writers was a hit for the Odyssey 35 years ago starting from April 5th till May 25th, 2014 at the Oddysey Theater in Los Angeles.

Chekhov meets Fellini in an enchanting tragicomedy brimming with wit, charm and a large dose of the magical by one of Poland’s most distinguished modern playwrights. Ron Sossi directs a revival of White Marriage by Tadeusz Różewicz in a translation by Adam Czerniawski, opening April 5 at the Odyssey Theatre in West L.A.

“The central theme is the battle between the part of us that is animal and uncontrolled – our sexual libido – and the part that wants to be civilized and orderly,” says Sossi. “That conflict is eternal and always of interest to me. Dionysus vs. Apollo. The play was written in 1975, but it’s set before the turn of the 20th century in a kind of Chekhovian environment, a society that revolves around manners, fashion and mores. But always surrounding their world is the forest, filled with animal, natural urges.”

He continues, “Różewicz wrote White Marriage during a very rich time in Polish theater, a time when Poland was still ruled by the Communist party. It’s extremely theatrical, highly expressionistic and tremendous fun. A lot of people didn’t get to see it when we did it the first time.”

Sossi first directed White Marriage at the Odyssey 35 years ago, in a production that garnered rave reviews and went on to tour throughout California. That production featured Beth Hogan in the role of the lusty younger sister, Pauline. This time round, Hogan returns in the role of the girls’ romantic aunt. The rest of the ensemble includes John Apicella, Mark Bramhall, Diana Cignoni, Steve Humphreys, Sarah Lyddan, Yulia Moiseenko, Sharon Powers and Austin Rogers.

Performances of White Marriage take place on Fridays and Saturdays at 8 p.m. and Sundays at 2 p.m., April 5 through May 25. On Sunday, April 6 only, the performance will be at 5 p.m. with no 2 p.m. matinee. Additional weeknight performances are scheduled on Wednesdays at 8 p.m. on April 23 and May 7, and on Thursdays at 8 p.m. on May 1, May 15 and May 22. Tickets are $25 on Wednesdays, Thursdays and Fridays, and $30 on Saturdays and Sundays, except for the opening night performance on Saturday, April 5 which is $45 and includes a gala reception with the actors. There will be four pay-what-you-can (minimum $10) performances on April 11, April 18 (wine night), April 23 and May 16 (wine night).