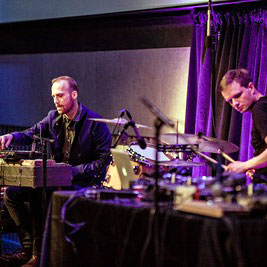 An instrumental project by Piotr Kurek "born of love for things old and mysterious," Pietnastka is one of the most interesting enterprises to emerge from the Polish tape revival movement. The project's debut album Dalia, released in 2011 as a cassette, explores some truly psychedelic territories with "woozy soundscapes and subcutaneous tensions crawling under layers of nostalgic, fairytale-like haze." Their music has also been described by Decoder Magazine as "a sprawling and epic synthesis of experimental composition with the traditional melodies of eastern Europe."

Warsaw musician Piotr Kurek was a co-founder of the pivotal Polish band Slepcy in the 1990s, but in recent years has established a name for himself, both as a solo musician and through an ever-evolving instrumental project with percussionist Hubert Zemler. He works in the realm of experimental music, sound and video collage, utilizing old keyboards, modular synthesizers, reel-to-reel and cassette players, amplified organs and acoustic instruments to create minimalistic, but at times frenetic sound tapestries that draw both on experimental music and traditional melodies. He has collaborated with a long list of music labels (most notably Digitalis, Sangoplasmo, Crónica Electronica), dance companies, and independent choreographers in Poland and abroad. In 2012 he was a fellow of OneBeat, a residency and tour program for musicians from around the world, funded by the US State Department's Bureau of Educational and Cultural Affairs and produced by Bang on a Can's Found Sound Nation.