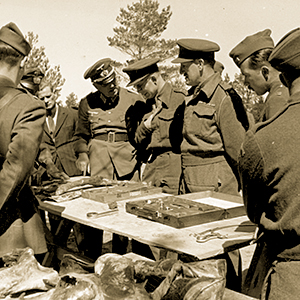 In November 2013, researcher Krystyna Piorkowska discovered a sworn deposition submitted by Lt. Col. John H. Van Vliet, Jr. on May 10, 1945, while he was still in Paris.

This discovery underscores a heretofore unstudied area – the entirety of knowledge possessed by Great Britain and the United States regarding the Katyn Massacre, supplied to these governments at great personal risk by their own countrymen who were German prisoners of war.

Piorkowska discusses the implications of this sensational discovery, first announced at a press conference of the Minister of Culture and National Heritage of Poland, on January 8, 2014: after arriving in Paris, Van Vliet was questioned by a War Crimes Investigation Unit officer, and submitted a sworn deposition. This document implies that both Colonels Van Vliet and James R. Hoffman (Investigator-Examiner) believed that the Soviet Union would be charged with the Katyn Massacre.

Krystyna Piorkowska is a graduate of CCNY, Columbia University and conducted post-graduate work with Professor Artur Sandauer at Warsaw University. In recent years she worked for the Muzeum Wojska Polskiego preparing and translating materials for the museum. While still continuing her Katyn research, she has expanded her scope to include the issue of the four Roman Catholic priests present at various times in wartime Moscow; research that will aid in defining Stalin's relationship with FDR.