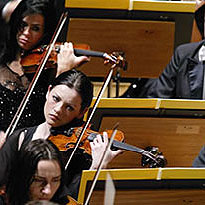 (Bronx, NY) Witness the grandeur and splendor of Orquestra de São Paulo, the leading, 100- piece orchestra from South America, as it presents a lush program replete with the finest Latin American and Spanish compositions at Lehman Center for the Performing Arts on Saturday, November 4, 2006 at 8pm. For this special concert the orchestra will present Heitor Villa-Lobos\' Bachianas Brasileiras no. 4 and Concerto No. 2 for Cello and Orchestra (with a special appearance by master cellist Antonio Meneses); Jerónimo Giménez\'s La Boda de Luís Alonso, one of the composer\'s three great masterpieces and Alberto Ginastera\'s Estancia: Ballet Suite, the ultimate condensation of a national Latin-American ethos. (Additional information on the program is attached.) The orchestra is conducted by Maestro John Neschling, celebrating his 10th anniversary with the orchestra. Tickets are $35, $30, $25 and $20 and can be purchased by visiting or calling the box office, 718-960-8833 or on line at www.LehmanCenter.org .

Founded in 1954, the Orquestra de São Paulo is at the forefront of classical music in South America and features native Brazilian musicians, as well as other musicians of diverse origins, and has risen to be the number one orchestra in Brazil and achieved high international status. Since 1997, under the guidance of Maestro John Neschling, the Orchestra has transformed itself into a major cultural presence in Latin America with more than 130 annual concerts and a 20-CD recording deal with Sweden\'s BIS Records. To date, close to half of the 20 discs on BIS have been recorded, featuring the entire symphonic repertoire by Camargo Guarnieri, opera Jupyra by Francisco Braga, and other compositions by Villa-Lobos, Francisco Mignone and Claudio Santoro. The orchestra has regular tours to South America and Europe, and their current tour is only the second time the company has toured the U.S.

The cello was Villa-Lobos\'s instrument, the one he became the most skilled in and played professionally. The Brazilian cellist Antonio Meneses a von Karajan protégée, Tchaikovsky Gold Medal Winner and First Prize Winner in the Munich International Competition, will be the featured soloist performing in Villa Lobos\'s Cello Concerto No. 2. A frequent guest artist in the music capitals of Europe, the Americas and Asia, Antonio Meneses has collaborated with numerous international conductors including Herbert von Karajan, Riccardo Muti, Mariss Jansons, Claudio Abbado, André Previn and Andrew Davis. Antonio Meneses is a long-time member of the Beaux Arts Trio with whom he tours internationally.


Lehman Center for the Performing Arts Concert Hall is at 250 Bedford Park Blvd. W. on the campus of Lehman College in the Bronx. Tickets can be purchased through 24 hour online access at www.LehmanCenter.org or by calling the Lehman Center box office at 718-960-8833 (Mon. through Fri., 10am-5pm and beginning at 12 noon on the day of the concert). Lehman Center is accessible by #4 or D train to Bedford Park Blvd., and is right off several major highways, including the Henry Hudson Parkway, the Saw Mill River Parkway and Major Deegan Expressway. Over 1000 free on-site, attended parking spaces are available.

Lehman Center receives support from the New York City Department of Cultural Affairs and through corporations, foundations and private donations.