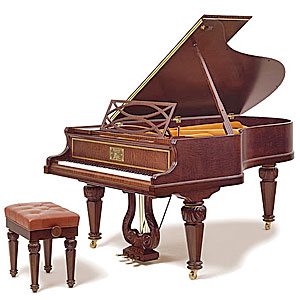 This event also celebrates the 20th anniversary of Chopin Theatre the privately owned adventure of a sassy young black MBA from public housing and a middle-aged Polish biologist with a tendency to talk (a lot).

BIOGRAPHIES Edward Auer - has long been recognized as a leading interpreter of the works of Chopin. As the first American to win a prize in the prestigious International Chopin Competition in Warsaw, he has returned to Poland for well over 20 concert tours, playing in every major city and with every major orchestra.  Auer has played solo recitals and concertos in over 30 countries on five continents, collaborating with such conductors as Zubin Mehta, Charles Dutoit, Herbert Blomstedt, Sergiu Comissiona and Riccardo Chailly.  For the past two years, Mr. Auer has been at work on an ambitious series of recordings of the works of Chopin, to celebrate that composer’s 2010 bicentennial. As currently projected it will consist of at least eight volumes. The first, Chopin Nocturnes Volume 1, was released to great acclaim and a dazzling review from New York Concert Review’s Harris Goldsmith.
On March 1, traditionally recognized as Chopin’s birthday, Auer gave an all-Chopin recital at Indiana University in celebration of the Chopin Bicentennial. Speaking of the 24 Préludes, op. 28, the reviewer had this to say: “Auer, of course, knows their musical values and voyaged dexterously and consummately through them: the dissonant ones, the rippling, the fiery, the radiant, the mystic, the limpid, the melodic, the melancholic, the simple of line, the note-laden. His playing proved cohesive and inspired.”
Edward Auer is on the Piano faculty at Indiana University Bloomington. More information available http://www.edwardauer.com

Bill Johnston – is an Associate Professor of comparative literature and of second language studies (Ph.D, University of Hawaii at Manoa, 1995) as well as one of the leading translators of Polish literature in the English speaking world. Working in both prose and poetry, he has translated such authors as Witold Gombrowicz (Bacacay), Tadeusz Rózewicz (New Poems), Magdalena Tulli (Dreams and Stones and Moving Parts), Andrzej Stasiuk (Nine), Krzysztof Kamil Baczynski (White Magic and Other Poems), Juliusz Slowacki (Balladina), Boleslaw Prus (The Sins of Childhood and Other Stories), and Stefan Zeromski (The Faithful River and The Coming Spring). Johnston has held fellowships from both the National Endowment for the Arts and the National Endowment for the Humanities. In 2005 his translation of Magdalena Tulli’s Dreams and Stones (Archipelago Books, 2004) won the AATSEEL Translation Award.