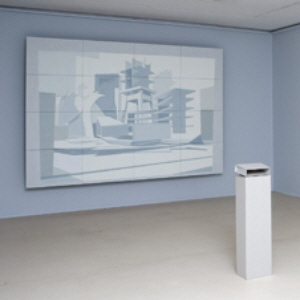 A major event on par with such renowned exhibitions as the Whitney Biennial, SITE Santa Fe has become an integral event for contemporary art aficionados, attracting tens of thousands of visitors from around the world. Past six biennials’ curators, including Bruce Ferguson, Francesco Bonami, Rosa Martinez, Dave Hickey, Robert Storr, and Klaus Ottmann, either arrived as or have subsequently become superstars in the world of contemporary art. The 7th SITE Santa Fe Biennial invites 22 artists to develop site specific projects expressly for the Biennial, among them Zbigniew Rogalski and Michał Budny, who will work as an artistic team.

Zbigniew Rogalski (b. 1974) is among the most interesting Polish artists of the generation that made its debut in 2000, the year in which his solo exhibition took place at the Centre for Contemporary Art in Warsaw. Rogalski\'s painting effectively oscillates between the photo-realist and the unrestrained painter\'s imagination. He strives to paint a specific modern experience of the world: flickering, fleeting, and constantly less and less obvious. MORE

Michał Budny (b.1976) creates sophisticated, meticulous reconstructions of objects and shapes taken from the immediate environment (postcards, mobile phones, CD players etc.) Small, light objects made of cardboard and other kinds of paper, often yellowed with age, are strikingly noble and reserved in their nearly abstract form. They seem to be timeless models of things, devoid of utilitarian value which become the quintessence of form and time combined. In recent works, Budny cuts out and glues together natural phenomena, that do not have a specific physical form, such as voice, rain or fog. MORE

Co-presented by the Association of Cultural Integration in Warsaw, associated with Raster Gallery, and the Polish Cultural Institute in New York.
JUNE 22 – OCTOBER 26, 2008