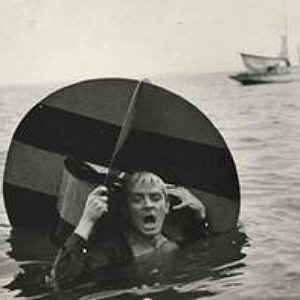 The Museum of Modern Art’s Jazz Score (April 16 – September 15), includes a broad representation of Polish films, many featuring the music of KRZYSZTOF KOMEDA, among other films with music by Duke Ellington, Miles Davis, Dizzy Gillespie, Modern Jazz Quartet, Thelonius Monk, Toru Takemitsu, and Wynton Marsalis; two live performances – one of them of Komeda’s music by Tomasz Stanko – and an international gallery exhibition that features Polish posters for films with jazz scores, among many other artifacts.

Masterpieces with scores by Krzysztof Komeda – two classic features: KNIFE IN THE  WATER by Roman Polanski and LE DEPART, anexuberant  New Wave film by Jerzy  Skolimowski, as well as brilliant shorts by Polanski, THE FAT AND THE LEAN, and Miroslaw Kijowicz,  the animated BANNER (May 17 & 22), are included among the more than 100 films presented in MoMA’s Jazz Score,  which offers such classics as Louis Malle’s Elevator to the Gallows with  music by Miles Davis and Antonioni’s Blow-Up with music by Herbie  Hancock. Polish films in this series, in addition to those with music by Komeda,  include Polanski’s Repulsion  with music by Chico Hamilton and the first experimental film by Zbigniew Rybczynski,  Plamuz with music by Zbigniew Namyslowski (August 1, 3, 7, 9).

The Jazz Score  series also includes a selection of Polish film posters in the  international exhibition and a Concert Tribute to Krzysztof Komeda  by the Tomasz Stanko Quartet with special guest Billy Harper celebrating  the film music of Komeda, who helped establish Eastern Europe’s  underground jazz scene in the late 1950s and who went on to write the  haunting scores for some 40 films,  including Rosemary’s Baby.

"The introduction of contemporary jazz to film scoring in the mid-twentieth century brought fresh forms of sophistication and
innovation  to world cinema. Until the 1950s, jazz had primarily been used in film as atmospheric or incidental music or during show-stopping musical numbers. Jazz Score  celebrates the groundbreaking collaborations between filmmakers, composers,  and
musicians who, by experimenting with new forms and techniques, have radically transformed both art forms – jazz and the cinema – from  the 1950s to the present day". (Josh Siegel, curator of Jazz Score)