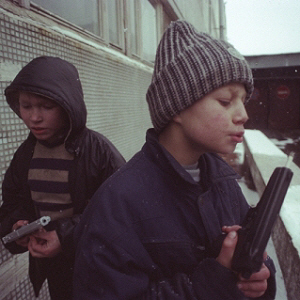 An intimate portrait of children living in Moscow train stations, The Children of Leningradsky (35 mins) explores the overwhelming crisis of homeless children in Russia. Sleeping in stairways, garbage containers and underground tunnels, they panhandle or prostitute themselves for money. They sniff glue to curb hunger and to escape from the violent world around them. Yet many of them consider life on the streets a better alternative to what they experienced at home.

7 ½ Cinema is the Chopin Theatre based initiative that regularly presents film screenings with various film groups.  The debut of 7 ½ Cinema began with "A Tribute to Ingmar Bergman" with Chicago Cinema Forum (as well as the premiere India Matri Bhumi) and included presentations with Chicago Underground Film Festival; Split Pillow Productions and Chicago Filipino American Film Festival.  Chopin Theatre is an independent arts center in the heart of Chicago\'s artistic neighborhood, Wicker Park founded in 1990.

Hanna Polak was born in 1967 in Katowice, Poland.  From 1987-88 she worked as a stage performer in the Theatre of Entertainment, Chorzov.  In 1988-91 Hanna studied acting and theatre studies at the Acting School in Wroclav and Warsaw. Hanna has been involved in charitable activities in Russia since 1995. In 1997 Hanna founded and later collaborated with Active Child Aid to help the underprivileged children of Russia. Hanna uses her photography to help the Russian children. Her photographs have been printed in various magazines and newspapers including, Ogonyok (Russia), The Moscow Times (Russia), Avisa Norland (Norway), Olivia (Poland), Przekroj (Poland), Los Angeles Times (USA), Nowy Dziennik (USŔ), Kurier Plus (USA), Newsweek (Poland), Super Express (Poland) and others.  Her work as a freelance cinematographer has been featured on ABC TV, France-2, Fuji TV (Japan), ITN (England), TVN (Poland) and various Russian TV stations.  Hanna\'s additional works include, "My Warsaw - Look From The East" for
ARTE TV and Channel 2 on Polish TV, where she worked as assistant to the director.

In 2002 Hanna began her studies in the Cinematography division of The Cinematography School of Moscow.   That same year she received the award for The Best Producer of Documentary and Short Films at the Documentary Film Festival in Krakow.  In 2004 Hanna completed work on her first independent short film on the life of legendary filmmaker Albert Maysles entitled, Al. Al first opened at the Documentary Film Festival in Krakow, Poland, where Albert Maysles received his Life-Time Achievement Award.  In 2005 she was awarded the Crystal Mirror award by the Zwierciadlo magazine in Poland, the award for the "people of dialogue, those who are uniting, not dividing".

Currently, Hanna is producing a film about Leon Chec, an artist and soldier in WWII and a follow up film to The Children of Leningradsky about the children living in Moscow\'s garbage dumps.