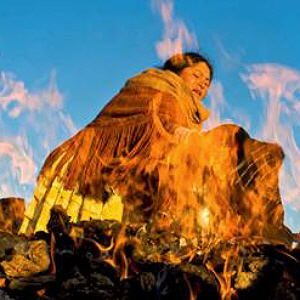 The mysterious sanctuary and the main oracle of the Fourth Part of the Inca Empire was rescued from oblivion by the Polish-Peruvian archaeological mission.

It is situated in the area that tourist guide-books describe as "an exotic, remote region rarely visited by the travelers". Coropuna, the biggest volcano in Peru towers over the area. The Incas recognized the mountain as sacred; there originated the ancestors of the people of Condesuyo province, and there the souls migrated after death. It was the house of god.

Do the ancient gods of the Andes still live in the mountains? In search of an answer to this question we travelled thousands of miles:
from the deserts on the shore of the Pacific Ocean to the glaciers; from the sanctuaries at Lake Titicaca to the wilderness around the
volcanoes. Archaeologists from the Centre for Pre-Columbian Studies of the University of Warsaw were our guides. In Peru and Bolivia they explore the past and preserve its traces.

Monika Rogozińska - journalist, Special Projects Consultant at National Geographic Poland. Member of the mountain rescue service and a mountain guide. A journalist since 1989, writing for Rzeczpospolita daily as well as for magazines in different countries covering
exploration, science, travel and history. Editor, co-author and consultant on several books. Co-organized expeditions to the Himalayas
and Karakorum, and was a correspondent on 8,000-metre winter climbs at Nanga Parbat, Makalu,  K2 - the first-ever from the Chinese side. Co-founder of the Polish Chapter of The Explorers Club. Organized several expeditions following ancient civilizations, promoting World Heritage and entering remote areas of the globe.

Mariusz Ziółkowski, archaeologist, ethnohistorian, specialize in the archaeology and history of the Inca Empire. Director of the Centre for Pre-Columbian Studies of the University of Warsaw; Co-Director (together with Peruvian Luis Augusto Belan Franco) of the
archaeological and conservation  „Project Condesuyo” in the Peruvian Andes and co-director (together with Italian Giuseppe Orefici) of  the Polish – Italian Archaeological Project “Kantatallita – Tiwanaku” in Bolivia. Member of the Institute of Andean Studies (Berkeley), of the Deutsches Archeologisches Institut (German Archaeological Institute - Berlin), an of The Explorers Club, NY. Decorated by the Government of Peru with the Order for Distinguished Merits, 1998.

As part of the De Lamar Mansion Salon of Arts & Ideas at the Consulate General of Poland in New York.