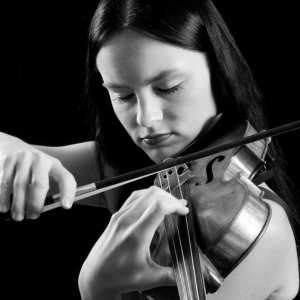 9th, 2008, at 5:30 PM. The program will include works by Beethoven, Milhaud, Ysaye, Lutoslawski, and Szymanowski, as well as the world premiere of a new work by Jakub Ciupinski. The two outstanding performers appearing with Ms. Augustyn are pianist Kevin Loucks and harpsichordist Alexandra Snyder.

Kinga Augustyn is a candidate for the Doctor of Musical Arts degree as well as a teaching assistant at the State University of New York, Stony Brook.  A recent Master’s graduate of the Juilliard School in New York City, where she studied with Cho Liang Lin, Naoko Tanaka, and the legendary Dorothy DeLay, Ms. Augustyn has already released her debut CD of the Paganini 24 Caprices for Violin Solo.  As a soloist, she has appeared with the Rossini Quartet (Magdeburger Philharmoniker), the Chamber Orchestra Leopoldinum, the Wroclaw Philharmonic Orchestra, and the American Academy of Conducting Orchestra in Aspen, among others.  She has given numerous solo and chamber recitals in the US at halls including Paul Hall, Alice Tully, and the Metropolitan Museum of Art, as well as in Europe.  As a Juilliard student, Ms. Augustyn served as a concertmaster of the Juilliard Chamber Orchestra.  Still involved in Juilliard’s activities and performances, Ms. Augustyn will participate in the upcoming residency of Baroque music specialists William Christie and Les Arts Florissants.

Jakub Ciupinski is a graduate of the Music Academy in Krakow, where he studied under the direction of Zbigniew Bujarski and Krzysztof Penderecki. Currently he is studying with Christopher Rouse at the Juilliard School. His works have been performed in festivals around the world, including the Festival of Electronic Music in Bourges, the New Music Festival in Bromsgrove, and the Festival “Contrasts” in Lviv. Emaus, written for Ms. Augustyn, takes its title from the name of the Polish religious holiday celebrated in Cracow during the Easter season in which special absolution is given to parishioners. Outside the church, however, a carnival atmosphere prevails. The main motif of the piece comes from the last three pitches of Milhaud’s Sonata for Violin and Harpsichord.