WHEN THEY COULD FLY - a Polish immigrant’s evocation of American 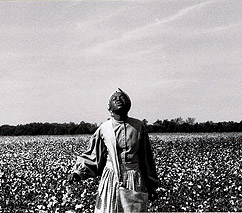 When They Could Fly is a poetic film adaptation of a magical folktale that uses the period of American slavery as a stage to show how people can survive and overcome the most extreme experiences through the power of their own will. A group of slaves on a 19th-century cotton plantation in South Carolina feel increasingly trapped and helpless. But a promise of hope appears in the form of a man who arrives with an impossible story. The question is whether his "flying lie" can bring hope and even salvation.

When They Could Fly has been selected for showing in the NewFilmmakers Short Film Program along with two other shorts starting at 8:00 PM. The program is preceded at 6:00 PM by works of African-American filmmakers from the Black Documentary Collective, which is co-presenting this evening’s films. It is followed at 9:00 PM by a third program featuring a short and a feature by African-American filmmakers. Tickets at $5 for admission to the full evening of films go on sale at the box office half an hour before the 6:00 PM program. Call (212) 505-5181 for details or visit http://www.newfilmmakers.com