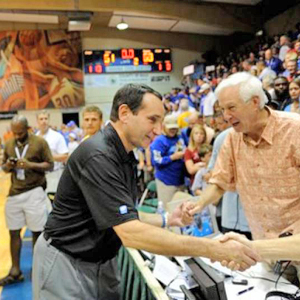 KA’ANAPALI, Maui - Coach Mike Krzyzewski did get some relaxation time during the EA Sports Maui Invitational Tournament during the Thanksgiving recess. Winning was still the overriding reason his Blue Devils were in the 50th State though.  Duke (7-0) overcame a very stubborn and relentless Kansas team to win 68-61.  It was the fifth time Duke has won the tourney and they boosted their Maui streak to a 15-0 mark. Duke previously won in 1992, 1997, 2001 and 2007.

The accolade for the championship team is named the ‘Wayne Duke Trophy’.  The namesake honor is for the former and longtime commissioner of the Big Ten Conference.  In retirement he was a consultant to the tourney.

A good contingent of the Duke basketball family traveled to Hawaii to support the Blue Devils.  The packed Lahaina Civic Center (2,400 capacity) had standing room only.  The great number of Kansas supporters helped make for a loud and raucous final.  Boosters from both schools made more noise than was thought possible.  Dave Odom, director of the tournament said, “For marquee value this game ranks at the top.”

Even more energy was created in the stands when Maui native son and Philadelphia Phillies centerfielder Shane Victorino showed the Aloha spirit.  He was overwhelmed with well wishers and old school friends.  The “Flyin’ Hawaiian” as he is known was overly gracious and generous with all the photo and autograph requests.

The game was like a heavyweight prize fight as the two heralded basketball programs went back and forth.  Junior 6’11” Ryan Kelly got MVP honors for Duke and had 17 points.  Mason Plumlee also got 17 also with 12 rebounds.

It was Duke sophomore Tyler Thornton with the end of game heroics as he hit a hands-in-the-face three-pointer with 20 seconds left to finish Kansas off, 68-61.  He had previously made a three point shot at 1:10 to go.  Thornton, who had been inserted for defense said, “The last shot felt good from the release but I didn’t see it go in.”

“This is what the Maui Invitational is all about,” said Coach ‘K’ after the game.  “We don’t win the tournament without the play of Plumlee.”  He also praised Kelly for his consistent play in all three games.  It was the 907th coaching victory for the storied coach.

Kansas was up 35-31 at halftime.  After the game Kansas coach Bill Self said, “Give him (Thornton) credit; I don’t know if he even saw the rim when he took the shot.”  It was a great shot and that was the ballgame. That was game.”

Michigan beat UCLA in the consolation 79-63.  Michigan senior guard Zack Novak had a career-high 22 points in the win.

MAUI NOTES: Kemper Lesnik, a Chicago sports marketing firm announced the teams for the 2012 EA SPORTS Maui Invitational.  They include Butler, Illinois, Marquette, Mississippi State, North Carolina, Texas, and host Chaminade University.  It will be the 29th edition of the event.

The First Maui College Basketball Tournament was in 1984.  In 1985, The Rolco Sports Network broadcast the first national telecast of the tourney then played at the War Memorial in Kahalui, Maui.  Michael Reghi and Raymond Rolak were on air with Jon Brekke and Brian Kohne directing and producing respectively.  Michigan beat Kansas State 80-58 for the championship with Dell Curry of Virginia Tech being named as Outstanding Player.