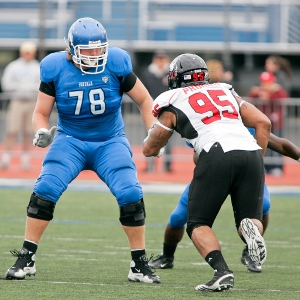 Buffalo--  Offensive lineman Matt Ostrowski is planning to play with a special purpose and so are his teammates. They are facing their last two games but the first plans are for the University of Akron.  The Zips will also have to contend not only with big and strong Ostrowski, but the renewed football intentions of the Bulls.

Up front, Buffalo is big across the board and will be ready for some redemption. According to Ostrowski, “Our ‘O’ line is ready for the challenge.  We have two games left, they are important to us and we will play our best players.”  Ostrowski, now a senior and the leader of the offensive line is planning to showcase his skills for the next level.  He has the size for the pros and the question will be can he demonstrate the mechanics involved for such an elite level?

The University of Buffalo football team has had a trying season. They went on the road and lost for the eighth time this year as Eastern Michigan took them, 30-17. They have only played EMU five times in history and dropped all of them. On the year, the Bulls are now 2-8 with two games left. There have been some bright spots though.

The Bulls played EMU tight for the first half.  Buffalo went in at the break down only 9-3, as Patrick Clarke made a 43 yard field goal with four seconds left. They came out with a first possession stop and then a quick control score, capped by a three yard TD by Brandon Oliver (133 yards on 18 carries.) The 10-9 lead wasn’t the only highlight for the Bulls. Chazz Anderson threw for 18 of 31 for 137 yards.

Oliver was again explosive with a 68 yard sideline sprint touchdown, his second of the day. The sophomore has now gone over 1,000 yards for the year, only the fifth Bulls player in history to do so.

The big difference was EMU quarterback Alex Gillett, who completing 10-of-15 passes for 234 yards and four touchdowns.  He also gained 89 yards on 19 carries.  That was the disparity as the Eagles twice overcame second half deficits.  It was a sparse 4,000 scattered throughout Rynearson Stadium to help celebrate EMU Senior Day.  A Buffalo bright spot was that the Bulls limited the Eagles vaulted running game to a 179 yard total.

Bulls head coach Jeff Quinn said, “We made too many mistakes that really cost us the game. We hold a team that’s averaged about 240 yards a game rushing to under 180 and then we give up (passing) plays.”

He later added, “Our big guys up front did a great job. They helped release Oliver.” A special highlight was the play of senior offensive linemen Matt Ostrowski and junior big boy Gokham Ozkan.

Ostrowski, who hails from Natrona Heights had a leg injury last year and started all 10 games this season. He has been a bright spot especially after bulking up from an intensive summer weight training program. The jumbo 6-6, 320 pound left tackle is an All-MAC candidate. He also plays other OL positions as well. Ozkan, on the right side is 6-7, 322 pounds. “Coach Quinn really highlighted ‘Ozzie’ for opening the hole for Oliver’s big run,” said Ostrowski.

“Buffalo has been great for my development as a player and I love the campus, there is so much to do here,” added Ostrowski. The summer work Ostrowski did not only have him bigger, but his speed and strength improved. He showed that he put his time in the weight room during the summer sessions.

The Bulls are home Saturday, November 19, hosting Akron at noon. They will finish at home with a Friday contest November 25, with Bowling Green visiting on their Senior Day.

EMU is 6-4 now also with two games left and a chance for a Mid-American Conference Bowl bid. They travel to Kent State next week.