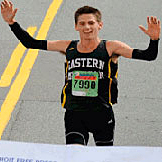 The race carried over the Ambassador Bridge into Canada and back.  There was a reception and block party for all the participants afterwards.

Over 20,000 runners participated in five different categories.  It was the 34th annual event.