Dombrowski Moves the Tiger\'s into Playoffs 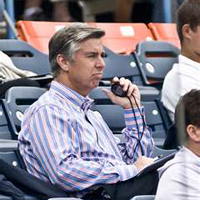 The baseball success of the Detroit Tigers this year is pointed toward one man. In the journey to the World Series it all started at the top and Dave Dombrowski made the right calls. This experienced and knowledgeable baseball man executed a season long plan.

New York - The Detroit Tigers are in the post-season because they are much bigger than Justin Verlander, Miguel Cabrera and Alex Avila.  Those three players have been a key to the playoff journey for sure.  Dombrowski pulled the trigger and made the acquisitions to give his manager the players he needed.  The team came together like a giant construction project with a good foundation and kept on building higher and higher.

Dombrowski has been Tigers president since 2001 and general manager since 2002 and he has seen highs and lows.  The business end of professional baseball is very complicated.  It is a system of managing contracts.  Since winning the American League Pennant in 2006 everything hasn’t continued smoothly for the Tigers.

As a longtime skipper, Jim Leyland made the correct field decisions.  It was amazing the criticism Leyland got for resting certain players during the approaching playoffs.  Everyone thinks they know baseball.  Dombrowski and Leyland really know baseball, and at the highest level.  They have both been here before and they know the season is a long journey.

This year has been both adventurously different and exciting.  The late season additions of Doug Fister, Wilson Betemit and Delmon Young gave Leyland what he needed.  The September run of 22-4 showed that the Tigers weren’t flukes and the Central Division wasn’t entirely weak.  The Bengals flexed their muscles.  It wasn’t the fade of Cleveland and Chicago; it was the strength of Detroit that won the division.

Of course Dombrowski had the support of team owner Mike Ilitch.  Ilitch also liked the pre-season acquisitions of Victor Martinez.  It cost the Tiger payroll a bundle but in spring training Ilitch told Martinez, “You’re my future leader.”

Leyland added about Martinez, “He’s been a God-send for us.  Not just as a productive hitter, but as a valuable teammate who’s become one of the true leaders on the team.

Everything isn’t perfect on the field as the Tigers defense is still suspect and base running is questionable.  Recent hitting success though has them primed for the playoff run.

Some of the playoff roster spots seem questionable.  As a longtime manager, Leyland knows the value of loyalty and Brad Penny did win 11 games.  Avilla, the 24 year old catcher who has had a breakout season said, “We have a great mix.  We’ve gotten a little bit of everything throughout the year and haven’t relied on any one aspect.”

The closer role of Jose Valverde has been as phenomenal as the seasons of Verlander and Cabrera.  Valverde had 49 saves.  Regarding comparing this team to the 2006 American League Champion Tiger’s, Leyland added, “These teams are pretty similar. Todd Jones was a good closer and Valverde is a good closer.  Fernando Rodney was our setup man and now we have Joaquin Benoit.”

The 2011 Detroit accomplishment was put together by two guys who deserve so much credit.  Dombrowski and Leyland got contract extensions and they earned them.  I say reward success and celebrate excellence.  Will it all come down to the New York Yankees ace pitcher C.C. Sabathia facing Verlander for the privilege of moving on to the ALCS?

The Yankees are three deep in the bull-pen and have future Hall of Fame stopper Mariano Rivera. Former Tiger centerfielder Curtis Granderson is carrying the Yankees. Remember Detroit did get Austin Jackson, Phil Coke, Daniel Schlereth, and Max Scherzer because of that trade.

Everything hasn’t been easy about this season and we don’t know where it will end, but 2011 has been one of the most exciting baseball years of all history.  Many are resurrecting the old 1984 Detroit Tiger catchphrase, “BLESS YOU BOYS” and enjoying the ride.  Detroit won it all that year over San Diego.

In a breaking announcement, A. J. Pierzynski, the 14 year MLB veteran has been a late addition to the post season broadcasting team for Fox Sports. The Chicago White Sox catcher will join host Chris Rose and analyst Eric Karros for pregame and postgame ALCS shows. The opinionated Pierzynski takes over for ex-White Sox manager Ozzie Guillen.