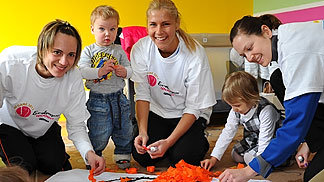 EuroLeague ‘STARS’ Put on a Show

GDYNIA - It was show time for the women, as they put on a display here for the FIBA EuroLeague All-Star game.  Not much defense was demonstrated but a lot of showmanship was presented.

In a format that resembled pick-up basketball, the team designated as the ‘Rest of the World’ bested ‘Team Europe’, 116-88.  Those in attendance at the Gdynia Sports Arena loved the scoring action.

Sylvia Fowles of Galatasaray (Turkey) was voted MVP of the game.  Fowles raised the roof with a fast break one handed slam late in the contest.  She finished with 16 points.  Fellow American and Nadezhda (Russia) center Tina Charles also entertained with some three point swishes.

Angel McCoughtry of Fenerbahce also had 16 points and nine rebounds for the ‘Rest of the World’.

Fowles, 6’5” and a Florida native, thrilled the crowd with her inside authority.  Her basketball pedigree includes four NCAA Final-Four trips for LSU.  She was also on the 2008 Olympic Gold Medal winners for Team USA.  Charles led the University of Connecticut to two undefeated NCAA national championships in 2009 and 2010.

In a scripted format, play was stopped after the opening tip so the Czech Republic’s Hana Horakova, the MVP of the FIBA World Championship, could receive her FIBA Europe Women’s Player of the Year award.  The Polish spectators approved wholeheartedly.

FIBA Europe announced here that the Final Four will be hosted by UMMC Ekaterinburg in Russia the weekend of April 8-10.  The Final Four format will be scrapped after this year and there will be a Final Eight competition beginning next season.

Wisla Can-Pak was the PLKK representative and was eliminated in two straight by Perfumerias Avenida of Spain.

Lotus Gdynia jumped out ahead and never looked back.  They were up 22-11 after 10 minutes and went to halftime 12 up, 40-28.  Elina Babkina added 17 points for Lotus Gdynia and Olivia Tomialowicz had 12.  Natalia Malaszewska had nine points for Energa Torun.

Naketia Swanier of the University of Connecticut and a Lotus Gdynia point guard was MVP of Round 24.  The winners are 16-7 on the year.