Buffalo and Troy at the 2018 Dollar General Bowl in Mobile 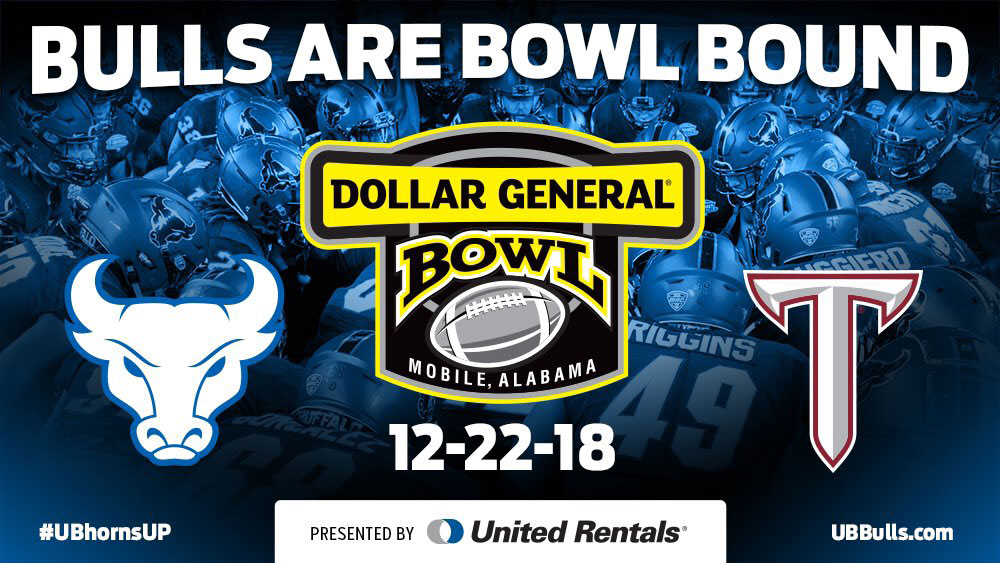 The Bulls to go to their third Bowl Game: MOBILE, AL. The University at Buffalo football team has been selected to play in the Dollar General Bowl, it was announced. The Bulls will face Troy University of the Sun Belt Conference at Ladd-Peebles Stadium in Mobile, AL on December 22. It will mark the third time in school history Buffalo will play in a bowl game.

The Bulls to go to their third Bowl Game

MOBILE, AL—    The University at Buffalo football team has been selected to play in the Dollar General Bowl, it was announced.  The Bulls will face Troy University of the Sun Belt Conference at Ladd-Peebles Stadium in Mobile, AL on December 22.  It will mark the third time in school history Buffalo will play in a bowl game.

With a record of 10-3, Buffalo is having the finest season in school history.  The 10 wins are a school record for a single season and UB's 7-1 conference mark is its best finish since joining the Mid-American Conference in 1999. The Bulls won the MAC East Division and advanced to the MAC Championship game for the second time in school history.  They lost a heart-breaker to Northern Illinois, 30-29.

It will be the Bulls' first-ever meeting with Troy.  The Trojans are 9-3 on the season and finished with a 7-1 conference mark.  Troy is led by running back B.J. Smith who leads the Sun Belt in rushing with 1,093 yards and 12 touchdowns on the season.

He further added, "It has been a historic season for the University at Buffalo Football program and we have an opportunity to continue to build upon this season by playing in a Bowl game that is known for providing a first class experience for its participants.   In addition, I would like to congratulate Troy University on their outstanding season.  This matchup has the makings to be one of the better ones this Bowl season.  We can't wait to get down to Mobile on December 18th."

The Dollar General is played it Ladd-Peebles Stadium in Mobile, AL.  The game is scheduled to kickoff at 7 pm (EST) and will air nationally on ESPN.

In the Mid-American Conference Championship, NIU scored the final 20 points for the impressive comeback.

NIU quarterback Marcus Childers passed for 300 yards on (21-33-1) but it was the spectacular catches of wide-receivers Spencer Tears and D.J. Brown that Buffalo had no answer for.  They both had two touchdown receptions for the Huskies.

Post-game NIU head coach Carey said, “Winning championships is hard and I am so proud of these guys, these student-athletes.  I'm proud of my coaches too … my years of coaching this is my favorite group to be around, and I've won championships before.”

Senior Anthony Johnson had two touchdown receptions for Buffalo.  UB coach Lance Leipold said, “We got stops, but field position changed quite a bit.  Play calls changed a little bit.  The first half, we stayed out of third-and-longs and did a really good job. The second half, not as much, and you saw their pass rush really starting to take effect.”

Buffalo went ahead early with their first and second drives resulting in TD’s.  With a missed PAT it was 13-0.  The half-time break saw Buffalo in the lead 22-10.

In related MAC football news, Bowling Green State announced that Scott Loeffler has been named the head coach of the BGSU football program and Central Michigan named Jim McElwain as the new football coach of the Chippewa’s.

For Buffalo and their faithful following, the date to remember is December 22.  The event schedule and related festivities are considered to be the best bowl that the MAC has affiliation with.  Former NFL quarterback, Archie Manning will serve as the keynote speaker at the annual Dollar General Bowl Mayor’s Luncheon on Friday, Dec. 21, 2018 at noon at the Mobile Convention Center.  He is busy in retirement watching his three sons, Cooper, Peyton and Eli.

Murray Cape, Selection Committee Chairman of the Dollar General Bowl said, “We are excited to be celebrating our 20th year and what better way to do so than by pairing Buffalo and Troy.”

After the Mayor’s Luncheon, the skies of downtown Mobile will be filled with beads and moon pies as the Dollar General Bowl presents Mobile’s largest Mardi Gras Parade.  Local high school marching bands and the Bowl teams’ bands and cheerleaders will all perform.  A huge crowd is expected to pack the streets for the first parade of the Mardi Gras season.     http://dollargeneralbowl.com/

The Quick Lane Bowl in Detroit at Ford Field on Wednesday, Dec. 26, at 5:00 p.m. and will feature Georgia Tech and Minnesota. https://www.detroitlions.com/quick-lane-bowl/