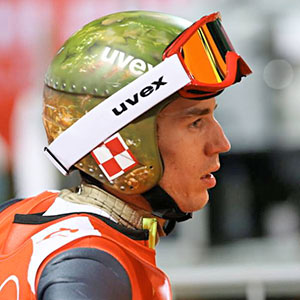 At the 2014 Sochi Olympics, Kamil Stoch, 26, is now a two time gold medal winner for Poland. Because of his celebrity in Poland, he was allowed by the Polish Ministry of National Defense to use the Polish Air Force roundel on his helmet. It only made sense and was a great moral booster for the other Polish Olympians. Who flies higher and more often than Stoch? “It is a badge of excellence,” said a spokesperson for the Polish Olympic Team. The Polish Ministry of Defense considers the use of emblem as an act of patriotism and goodwill.

The Polish Air Force red and white checkerboard is the national marking on military aircraft. It was originally used as personal insignia of Stefan Stec, a Polish fighter pilot, and then in December of 1918, it became a national roundel and military livery marking. The insignia became a worldwide symbol of courage from the success of the Polish fighter pilots during the Battle of Britain in World War II.

Stoch won his second gold medal in the men’s downhill ski-jump. Said Stoch, “\'I have weird thoughts at this moment. I’m thinking, ‘Is it happening for real or is it a dream?’”.