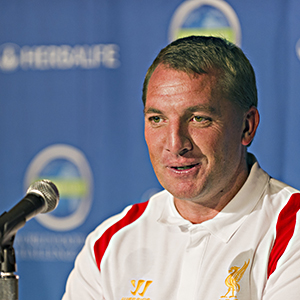 Old enemy. As depressing as Manchester United’s season has been so far, Brendan Rogers’ sides has come up leaps and bounds since he first took over the red half of Mersey Side. For a long time now, it was the Red Devils that enjoyed the modern success of the Premier League Era, while Liverpool has been reduced to be associated with mid table mediocrity.

The roles have reversed this season. United are, for the most part, playing like a midtable team while Liverpool plays football worthy of a top four Premier League club. Both clubs share the same crucial period within the next summer transfer window. For Liverpool, presuming they make Champions League football, it would be the first opportunity in a while to attract truly world class talent. Moyes, with his United Side, would be looking for heavy involvement during the summer, anticipating a massive United exodus with the likes of Vidic, Ferdinand, Evra leading the departures.

Both sides will be making the case to their summer targets as to why their clubs are the more enticing option over the wealthy Chelsea and Manchester City, or the everlasting Arsenal. Interestingly, both sides share the same talking points. Both are traditional English powers, both are an undergoing project, both are building a new era for their respective clubs.

Brendan Rogers, like United, lack quality in many areas that resemble that of a Champions League Club. Most notably, central midfield and full back positions. This is identical, for the most part, to United’s areas needing improvement.

And this is where Moyes may have massive difficulty convincing talents to join the Red Devils. Rogers has proven Liverpool’s ambitions, being absolutely adamant on keeping their talismanic striker, Luiz Suarez, over an unstable summer transfer window. Their squad plays exciting football while simultaneously getting the right results. The 5-1 win over Arsenal further helps his case. Liverpool, as much as United, are as traditional of English clubs as they come.

It is up to Moyes and his squad to show that they will be as promising a project as the Old Enemy’s.