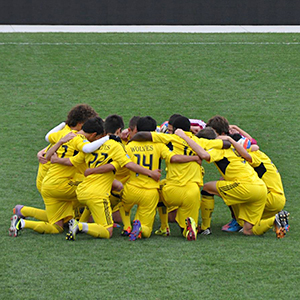 National Team to Play Next in Connecticut.

HOUSTON - Ken Krolicki is competing at the highest level of soccer competition and during the Development Academy Tournament, the University of Houston will be bivouacking his team in the dorms. It will be an introduction to college life. The top eight U-16 academy teams are competing for the national title. All eight teams won regionals in Dallas last week. This tournament, sponsored by the U.S. Soccer Association helps to develop future U.S. National team members. Most will come from this group of players. Krolicki, a senior to be at Canton High School has already committed to Michigan State.

The Michigan Wolves are sporting a 22-4-4 record on the year. Leading scorers are Kosti Moni with 10 goals and Hunter Barone with nine tallies. Defender Jimmy Fiscus has been a mainstay on defense all season. The Crew Academy Wolves bested the perennial power-team Vardar S.C. for the Michigan title. The team is coached by Lars Richters who played collegiately at Yale. Richters is a veteran coach and soccer administrator. He was honored as Central Region Coach of the Year last season by the U. S. Soccer Association.

“Krolicki has proven he is a winner. He makes everyone on the field pick up their game. He is a great example for his teammates because he never stops,” said Richters.

The tournament games will be played at the Houston Amateur Sports Park, and the championship game will be Saturday, July 20, at BBVA Compass Stadium, the home of Major League Soccer’s Houston Dynamo.

USA RALLIES TO BEAT CUBA IN CONCACAF QUALIFIER
Chris Wondolowski scored twice to raise his goal total to five in two matches and the United States came from behind to beat Cuba 4-1 in Sandy, Utah. After going down a goal in the first half, the U.S. Men’s National Team scored four consecutive times to seal its spot in the quarterfinals of the 2013 CONCACAF Gold Cup. Landon Donovan and Joe Corona got the other tallies for the Americans. Donovan’s goal, on a penalty kick, was his 53rd international score. With the victory, the U. S. National Team has tied the longest winning streak in team history at seven in a row.

The U.S. will be back in action for their third group game against Costa Rica at Rentschler Field in East Hartford, Conn., on July 16 at 8 p.m. ET. The match will be televised on FOX-Soccer.