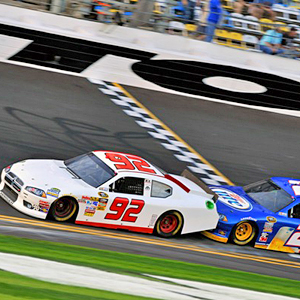 Brooklyn, MI - Brad Keselowski who was honored by the National Polish-American Sports Hall of Fame last week in a new type of category was criticized here in another controversy.

Kesolowski was confronted by seven-time NASCAR champion Richard Petty for comments about ‘poaching crewmembers. Keselowski, who speaks his mind, told media at a Ford Racing function on Thursday that he believed Hendrick Motorsports (Chevy) and Joe Gibbs Racing (Toyota) were stealing proprietary information and crew from Penske Racing, Roush-Fenway Racing and other Ford sponsored teams. Keselowski drives for Penske Racing.

At the Michigan International Speedway, Petty who was doing a military veterans promo for Echrich Sausage said Keselowski should concentrate on racing. “He (Keselowski) should be concentrating on what he can do to win another championship,” said Petty.

During the M.I.S. races here, Ford, Chevrolet, Toyota and soon to be Chrysler Racing have large interactive presence for the spectators. Menards sponsored the ARCA 200 Mile pre-lim won by Brennan Poole. The NASCAR Quicken Loans 400 was expected to have a full house and up to 200 mph racing conditions on the two mile banked oval raceway. Carl Edwards had the pole position.

Regan Smith won the Alliance Truck Parts 250 on Saturday with a late charge.

The two 2013 NPASHF inductees were ice skater Elaine Zayek and football player Jim Dombrowski. A dinner induction banquet was held in Troy, Michigan. The event was emceed by longtime Detroit sports broadcaster and voice of the Detroit Pistons, George Blaha.