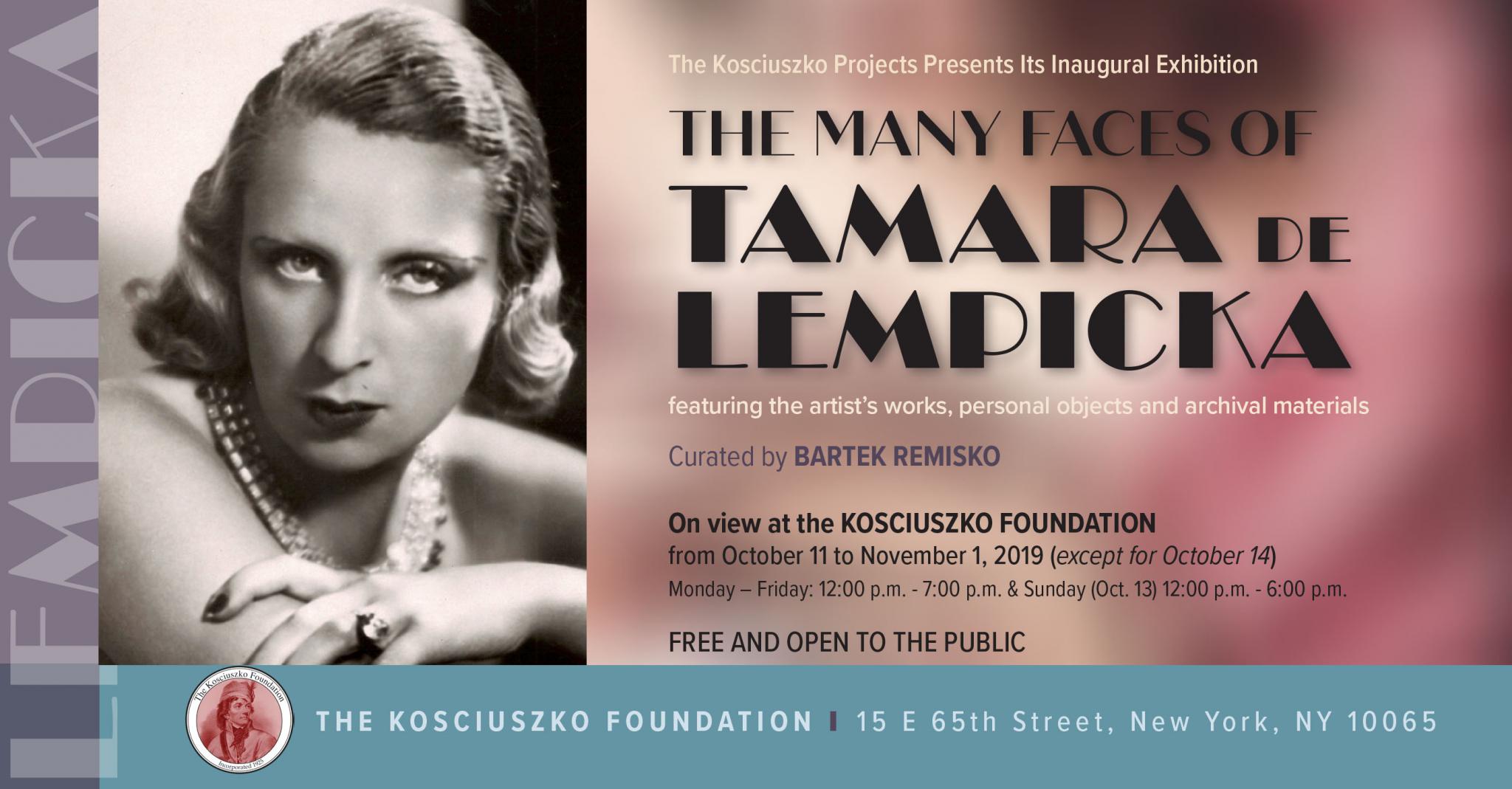 The Kosciuszko Foundation is pleased to announce the launching of a new cultural initiative, the Kosciuszko Projects, and its first exhibition: The Many faces of Tamara de Lempicka.

The Many faces of Tamara de Lempicka.

A selection of a dozen of works from different periods as well as personal objects belonging to the artist and archival materials will be shown to New York public for the first time in some fifty years.

This inaugural and intimate exhibition examines the work of Polish painter, Tamara de Lempicka, who in her portraits and depictions of chic figures simplified volume and space into tubular and crystalline forms. Lempicka is one of the first widely recognized female artists and her artistic language and independence continue to inspire new generations today (re)discovering her oeuvre in the era of Instagram and Social Media.

The Kosciuszko Projects, curated by Bartek Remisko, aims to present works by the world's renowned Polish artists. The Foundation expresses its gratitude to Ms. Krystyna Piorkowska, the show exclusive sponsor.

Tamara de Lempicka was a Polish painter known for her distinctive ArtDeco style. Born Maria Górska on May 16, 1898 in Warsaw, Poland (then part of the Russian Empire) to a wealthy family, she spent much of her childhood in Switzerland and Italy where she was influenced by the works of Renaissance and Mannerist masters. Living in St. Petersburg during the 1917 Russian Revolution, she and her husband fled to France to escape the Bolsheviks. During the 1920s, Lempicka became an integral part of the Parisian avant-garde scene. It was there that she invented her new persona Tamara de Lempicka. In 1939, the artist fled the impending threat of World War II for the United States, settling in Los Angeles and later New York. Though she stopped painting for several years, a renewed interest in her works during the mid-1960s led her to resume. Tamara de Lempicka died on March 18, 1980 in Cuernavaca, Mexico. Her works are included in the collections of Metropolitan Museum in New York, Pompidou Center in Paris,the National Museum of Women in the Arts in Washington, D.C., among others as well as in numerous private collections.

Photo of Tamara de Lempicka on the exhibition poster by CAMUZZI, circa 1934/37