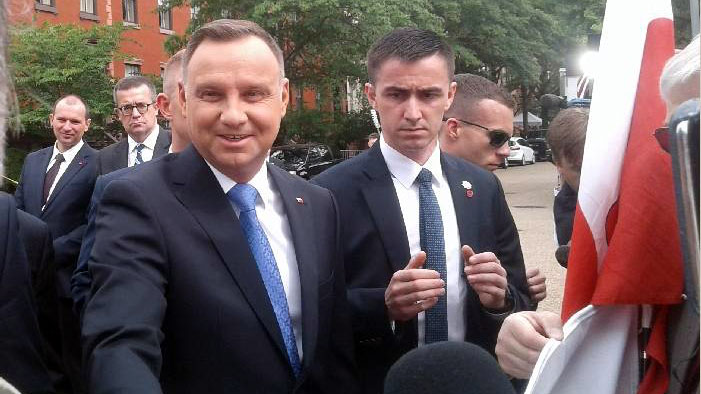 The current European security situation demands action. And the U.S. Administration responds with promise of reinforcements; forward basing in Poland is next step.

This rally marks support for the good work of the Trump Administration in fostering genuinely closer military and economic ties between the United States and Poland in the face of the reality of regional threats of Russian aggression.  Now more than ever the message of support, of deterrence by military response in Central/Eastern Europe in partnership with Poland, must be proclaimed!

Europe Today: 'The most unpredictable security environment in a generation'

NATO's Secretary General very recently characterized Russian military posturing on and near Poland's borders as 'the most unpredictable security environment in Europe in a generation.'  Indeed, Sec Gen. J. Stoltenberg warned only two months ago in a speech to a joint session of Congress that, "We see a pattern of Russian behavior: including a massive military build-up from the Arctic to the Mediterranean and from the Black Sea to the Baltic."  He added, "Russia has deployed new missiles in Europe. There are no new American missiles in Europe. But there are new Russian missiles. They are mobile. Hard to detect. Nuclear capable. Cut the warning time to just minutes. And reduce the threshold for the use of nuclear weapons in an armed conflict."

And he reminded us, "The strength of the North Atlantic Treaty Organization-NATO is that we have always been able to unite around our core task. To defend each other. Protect each other.  And to keep our people safe."  Congress responded enthusiastically to his message, with almost all Members standing SIXTEEN TIMES to applaud.

A Commitment to Poland as a NATO Ally: “We will stand with you”

The remarkable comments by Vice President Mike Pence in Warsaw this year paint a picture of intent -- to protect one of the most exposed and vulnerable points in the United States' system of alliances.  This Administration understands the present situation.  The Vice President declared, "America first does not mean America alone. We will always stand with the Polish people for liberty, democracy, the rule of law, and the respect for the dignity of every human life. The United States will never waver in our commitment to our common defense.”

He recalled the historical links between America and old Poland, "the long and storied history of friendship that ties together our two nations” he said. He was remembering a time when this nation was barely a country-- a fragile, weak collection of colonial communities that was 1776 America, which nonetheless had a strong sense of identity as an independent nation.  But America was unable to win a war against a strong, aggressive power without the extended hand of military expertise from overseas. “To this day," the Vice President said, "the American people honor the sacrifice of Polish heroes who shed blood alongside American patriots in the cause of our freedom, men like Tadeusz Kosciuszko and Casimir Pulaski.”  Though it is now hard to imagine how those events in the 18th century shaped the contemporary and future lives of Americans, we know this- it was big. With this in mind, he pointed out that U.S. soldiers and Polish soldiers stand 'shoulder to shoulder' today.

But he was actually there for another purpose: to deliver the words of an American President.  Quoting Donald Trump, he said the message is simply this: “We are with you, we will stand with you, and the United States of America stands with Poland as a part of the most successful mutual defense alliance in the history of the world, and we always will."   He also reminded us that the President himself was standing in the center of Warsaw, in July 2017 when he said, America will defend “the priceless ties that bind us together as nations, as allies, and as a civilization.”

“Just as Poland could not be broken, I declare’, the President said, “today for the world to hear that the West will never, ever be broken. Our values will prevail, our people will thrive." “Above all, we value the dignity of every human life, protect the rights of every person and share the hope of every soul to live in freedom. That is who we are,” President Trump said. “Those are the priceless ties that bind us together as nations, as allies and as a civilization.” These words are nothing short of a direct commitment by America to Poland in time of war. We know how rare such statements are.  The Administration is ready- Now it needs to act.

A Bigger Commitment to the Center of Gravity in Central-Eastern Europe: Poland

Now that Poland is the regional Center of Gravity, a depth of commitment needs to be shown.  Additional deployment of U.S.-NATO troops is our message.  The U.S. military’s Enhanced Forward Presence (eFP) forces are at Orzysz (opposite Sulwalki Gap) and 10 other locations within the NATO framework; from Bydgoszcz to Poznan, Redzikowo to Powidz, Lask, Zagan and Boleslawiec, the American flag can be found.  However, remember, NATO is a defensive alliance; it exists not to attack but to deter.

But is it enough? NO!  We know this because there is a growing threat, and there are plans for the future to increase U.S.-NATO presence to match the threat from the aggressor.  NATO recently announced a massive supply/equipment magazine will be built at a cost of a quarter billion dollars at Powidz air base. There are right now, this month, several military exercises underway in Poland: an air defense exercise; naval exercises in the Baltic; Special Forces exercises preparing for Russian hybrid warfare, and most significantly, the VJTF (Very High Readiness Joint Task Force) elite maneuver brigade deployment (of Dutch, Norwegian & German combat troops). These are part of the NATO Response Force—preparing to deter a war we all hope will not come - all under the command of U.S. Admiral J.G. Foggo.   This is a trans-Atlantic alliance in practice-- not an alliance in theory.

And this is why we, Polish Americans speaking with one voice, are here today!  To support and encourage the strengthening of the Eastern Front of NATO in partnership with Poland and its defense modernization, to give life and substance to the words of diplomacy we just read.  The deterrent against Russia must be made real, and there can be no division of opinion.  No division in Congress.  No doubt or division at the Pentagon. No division in American public opinion.

We reject any expressions of division on policy to meet Russian aggression.  We support affirmation of NATO Article V military guarantees to the region on NATO's eastern front-- with Poland as its Center of Gravity. This will ensure both Europe’s and America’s success in addressing their own societal priorities in the 21st Century.