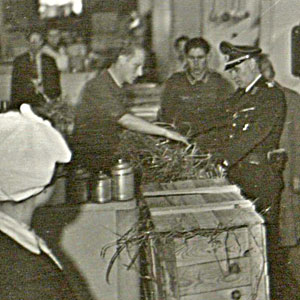 A long register of some 20,000 art works looted by the Nazis in World War II from Jewish families was put online Monday in the hopes of reuniting the paintings and objects with their rightful owners.

The project -- begun in 2005 -- is a joint initiative by an organization called Claims Conference and the United States Holocaust Memorial Museum.

The website www.errproject.org/jeudepaume is freely accessible and was drawn up using the archives of the German agency tasked with cataloguing the plundered art works from 1940 to 1944 -- the Einsatzstab Reichsleiter Rosenberg.

Those dossiers are today housed in the archives of the French foreign ministry, the US national archives and the German federal archives, historian Marc Mazurovsky told AFP.

Most of the art works belonged to French or Belgian families and were gathered up and added to an inventory by the Nazis at the Jeu de Paume Museum in Paris, during the Nazi occupation of France.

"It is now the responsibility of museums, art dealers, and auction houses to check their holdings against these records to determine whether they might be in possession of art stolen from Holocaust victims," said Berman.

The website lists the works and a description, mostly in German but sometimes in French, and in many cases the names of the owners that they were taken from.

"The database brings together the scattered records. For the first time it\'s all searchable, with photographs, details, etc," said Wesley Fisher from the Claims Conference.

"For the first time it looks at everything that was looted and from whom it was looted. In terms of the ability of claiming, it\'s great."

A total of some 260 collections and 269 owners have been identified in the database.

"These inventories are an incomplete reflection of the reality," said the historian Mazurovsky.

"Where have the hundreds of other objects gone, where are the repertoires, and what the government did after 1945? There is a whole dynamic missing."