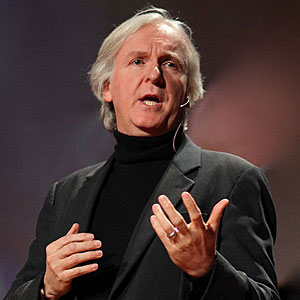 Film director James Cameron said he will return to Brazil this year to make a 3D film on indigenous people of the Amazon who oppose construction of a huge dam for fear it could flood tribal lands.

"I want to return to meet some of the leaders of the Xikrin-Kayapo tribe who invited me," the Canadian director said in an interview published in the Folha de Sao Paulo newspaper.

"I want to take a 3D camera to film how they live, their culture," said Cameron, whose blockbuster movie Avatar tells the story of the peaceful Na\'Vi people who live in harmony with nature on the planet Pandora and wage a bloody fight against strip-miners from Earth.

The filmmaker has already come to the Amazon twice in a show of support for the indigenous tribe and to film a short piece on their resistance to the damming project on the Xingu River, which will be included on the "Avatar" DVD to be released around Christmas.

Speaking of the fight against the dam construction, Cameron said he "did a film on the same topic," referring to Avatar, adding that when he was asked to help "the Brazilian Indians, who were desperate, I could not turn away."

President Luiz Inacio Lula da Silva gave the green light last week for the construction of the Belo Monte hydroelectric plant on the Xingu River, a southern tributary to the mighty Amazon. Work is set to begin on the project either late this year or early 2011.

Opponents of the dam project say it is not economically viable and would cause the displacement of 16,000 people because it would create a flood zone of 500 square kilometers along the banks of the Xingu.

The government says no indigenous land would be threatened and that it has spent millions on reducing the social and environmental impact of the dam.