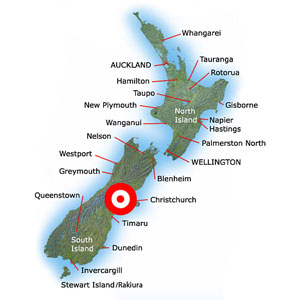 A powerful 7.0 magnitude earthquake caused widespread devastation in New Zealand\'s second largest city of Christchurch Saturday, with officials saying it was \"extremely lucky\" no one was killed.

The quake struck just before dawn when few people were on the streets sending building facades crashing to the ground, crushing parked cars and showering the roads with shattered glass.

Frightened residents fled from their homes to find streets covered in rubble and glass, but in the city of 340,000 only two people were seriously injured.

Many buildings were structurally damaged, and there were gas leaks, ruptured water and sewage mains, collapsed bridges and cuts to electricity supplies.

A state of emergency was declared in the city with people being warned to stay away from damaged buildings for fear of further collapses as severe aftershocks continued to rock the city.

"I think we\'ve been extremely lucky as a nation that there\'s been no fatalities... we\'re blessed actually," Civil Defence Minister John Carter said after being briefed on the impact of the quake.

He described it as a "significant disaster" and although many Christchurch residents were in shock he appealed for people not to flood hospitals with minor injuries.

"The most important thing we can tell anybody at the moment is please don\'t panic," he said.

Christchurch mayor Bob Parker said he was "horrified by the amount of damage" which daylight showed was considerably worse than first thought.

"We\'ve decided to declare the state of emergency in the city. It just makes it a bit easier for us now to move people out of buildings if necessary, close streets down," Parker announced on national radio.

The quake, initially recorded at a magnitude of 7.4, struck at 04:35 am (1635 GMT Friday) at a depth of five kilometres (three miles) some 45 kilometres west of Christchurch, the US Geological Survey said.

"Oh my God. There is a row of shops completely demolished right in front of me," resident Colleen Simpson told the Stuff website, adding that many people had run out onto the streets in fear.

Christchurch Hospital spokeswoman Michele Hider said two men in their 50s were seriously injured -- one was hit by a falling chimney and the other was cut by falling glass.

Several people were treated for minor injuries from objects falling in their homes, while hospitals had put additional doctors on standby because of the intensity of the quake and the extent of the damage.

"There\'s considerable damage there, and we\'ve already had reports of looting. Shop windows are broken and obviously it\'s easy pickings for displays and things."

Coleman said that with the extensive damage, people were being urged to stay at home.

"We\'ve got considerable road damage, there\'s gas leaks, there\'s been damaged water pipes, we\'ve got sewage in houses and quite a lot of power lines and power poles down. It\'s very unsafe to be out and about."

Roads in the seaside suburbs were packed with cars as residents moved inland, but there were no tsunami alerts issued.

A swarm of aftershocks continued to shake the area, while electricity supplies were cut to about half of the city.

Kevin O\'Hanlon, from the Mairehau area of Christchurch, said: "Just unbelievable. I was awake to go to work and then just heard this massive noise and, boom, it was like the house got hit. It just started shaking. I\'ve never felt anything like it."

Mayor Parker said he was in bed when the quake struck and he was "absolutely scared. I\'ve never felt anything like it and I\'ve experienced, like most Kiwis, a number of good shakes."

The quake was felt throughout the South Island and the lower North Island.