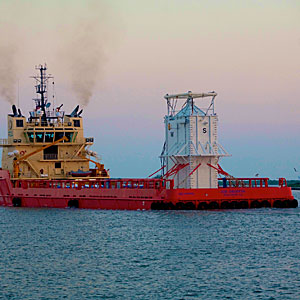 The race to avert an oil catastrophe in the Gulf of Mexico intensified Thursday with BP rushing to lower a dome to contain the spill, while sheen was confirmed on land for the first time.

The unprecedented operation to place the 100 US ton (90 metric tonne) dome over a gushing pipe on the seabed is seen as the best hope in staving off the biggest US environmental disaster since the 1989 Exxon Valdez spill in Alaska.

The white box-like structure will be lowered 5,000 feet (1,500 meters) onto a pipe which was fractured by the April 22 sinking of a BP-leased oil rig. It will then be connected to a tanker on the surface.

BP officials say they hope to have the dome "operational" by Monday, when a large part of the oil would be funneled up safely to be stored and processed.

Residents from Texas to Florida are anxiously awaiting the outcome of the perilous operation as failure would mean the crude will continue to gush for three months, putting the livelihoods of coastal communities at risk.

A giant slick the size of a small country has been looming for days off the coast of Louisiana and officials confirmed for the first time Thursday that parts of light sheen had started to wash up on land.

"Teams have confirmed oil on Freemason Island," Coast Guard Petty Officer Connie Terrell told AFP. "It is at the south end of the Chandeleur Islands. It is largely sheen with no evidence of medium or heavy oil."

BP spokesman John Curry said emergency teams had been sent to the island -- a favorite fishing spot for recreational anglers some 30 miles (50 kilometers) off the coast -- to deploy inflatable booms to protect its prime marshland.

"This is the first confirmation of shoreline impact we have had," Curry told AFP. "We are doing everything we can to make sure a major impact doesn\'t happen."

The Chandeleur Islands form the easternmost point of Louisiana and are part of the Breton National Wildlife Refuge -- the second oldest refuge in the United States and home to countless endangered shorebirds.

BP managed Wednesday to cap the smallest of three leaks hemorrhaging crude into the Gulf, and have resumed burning operations of some of the heaviest parts of the slick.

The operation to place a valve over a ruptured pipe and shut off the flow using a remotely-controlled submarine had no impact on the volume of oil gushing into the sea, but allowed efforts to focus on the two remaining leaks.

More than two weeks after the Deepwater Horizon rig exploded, the full impact of the disaster is still unfolding.

Fears are growing that sea life is already being affected in a region that contains vital spawning grounds for fish, shrimp and crabs, and is a major migratory stop for rare birds.

Even though oil has not yet reached land in a major way, experts warned that an environmental disaster was already unfolding deep beneath the Gulf of Mexico and in its swirling currents.

"That surface zone is where the oil is at its most toxic and when the animals are at their most sensitive," Doug Rader, chief ocean scientist at the Environmental Defense Fund, told AFP.

"If you\'re looking at the underside of the spill you can imagine a rain of hydrocarbons and toxic materials coming down piecemeal into waters below and onto the bottom."

If estimates are correct, almost three million gallons of crude have entered the sea since the BP-leased platform spectacularly sank on April 22, still ablaze more than two days after the initial blast that killed 11 workers.

The riser pipe that had connected the rig to the wellhead now lies fractured on the seabed a mile below spewing out oil at a rate at some 5,000 barrels, or 210,000 gallons, a day.

BP began operations on a relief well Sunday, but the process is expected to take up to three months so the containment dome is seen as the best short-term fix.