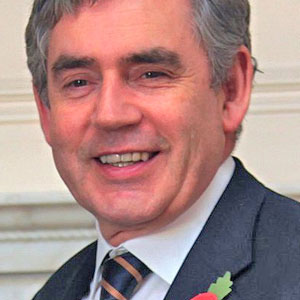 British Prime Minister Gordon Brown braced for a final and crucial TV debate Thursday before May 6 elections, reeling from a storm of criticism over his dismissal of an elderly widow as \"bigoted\".

The last of three televised contests with Conservative leader David Cameron and Liberal Democrat leader Nick Clegg focused on the economy, an issue on which former finance minister Brown could be expected to do well.

But the widespread condemnation of his remarks Wednesday about 66-year-old Gillian Duffy has piled the pressure on the prime minister and his Labour party, already trailing in second and even third place in the polls.

Brown apologised in person to Duffy after being overheard on a microphone dismissing her as a "bigoted woman" following an apparently routine campaign encounter in which she asked questions about immigration, tax and the deficit.

But opponents and the press poured scorn on his reaction, with the left-wing Guardian describing it as "the political catastrophe of the 2010 campaign".

"This was the authentic Gordon Brown -- thin-skinned, paranoid and perpetually on the hunt for someone else to blame," blasted the right-wing Sun.

The prime minister emailed Labour activists and candidates to apologise for his remarks, and Labour allies rallied round to try to contain the damage.

"No-one can suggest this wasn\'t damaging. You have to look at how Gordon responds. I think Gordon has dealt with that properly," Home Secretary Alan Johnson told BBC radio Thursday.

Brown\'s wife Sarah told the Daily Mirror: "His apology was from the heart."

With just one week to go before polling day, the election remains wide open. Lib Dem leader Clegg\'s strong performance in the TV debates has boosted support for his third party and ensured the result will be on a knife-edge.

A daily YouGov tracker poll for The Sun Thursday showed the Conservatives were up one point on 34 percent, the Lib Dems were up three on 31 percent and Labour had dropped two points to 27 percent.

A second poll, by ComRes for ITV and The Independent, put the Tories on 36 percent, compared to 29 percent for Labour and 26 percent for the Lib Dems.

Most pollsters predict Britain is heading for a hung parliament, in which no one party has an overall majority -- although it remains to be seen how much Brown\'s gaffe will alienate Labour supporters.

The incident began innocuously, with long-time Labour voter Duffy popping out for a loaf of bread from her home in Rochdale, northwest England and, spotting the prime minister out canvassing, heading over to talk to him.

The grandmother peppered Brown with questions about immigration, the national debt and tax in front of TV cameras, and they parted on good terms.

But afterwards, Brown got into his car and immediately declared the encounter a "disaster" -- remarks that were picked up on a broadcaster\'s microphone he had forgotten to switch off.

"That was a disaster," Brown said. "Should never have put me with that woman -- whose idea was that?" He added: "She was just a sort of bigoted woman."

Listening to the recording shortly afterwards, Duffy said the remarks were "very upsetting", adding: "I\'m very disappointed... He\'s an educated person, why is he coming out with words like that?"

Brown later went to Duffy\'s modest terraced house to apologise, after first saying sorry on the radio and by telephone.

"I\'ve just been talking to Gillian, I\'m mortified by what\'s happened," he said on the doorstep after spending 40 minutes inside. "I\'m a penitent sinner."