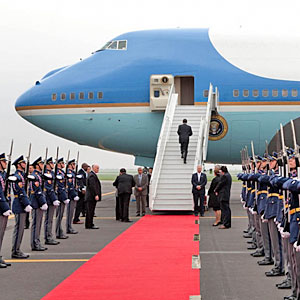 The President hosted leaders from eleven Central and Eastern European countries for dinner tonight in Prague. Each leader congratulated the President on the historic signing of the New START agreement between the United States and Russia earlier today.

In discussing European security, the President’s counterparts expressed their view that the improvement in relations between Washington and Moscow has reduced tensions and created new opportunities for them to improve their relations with Russia.

The leaders agreed that the Atlantic Alliance is central to our shared interests and to global security.  The President affirmed the importance of ensuring that Article 5 remains relevant to meeting 21st century threats.

The leaders also reaffirmed their support and commitment to the NATO mission in Afghanistan and the President thanked each of them for their country’s significant contributions and sacrifices there.

The leaders agreed on the importance of effectively addressing Iran\'s failure to meet its international obligations, and of promoting stability in the Balkans.

The President met with: