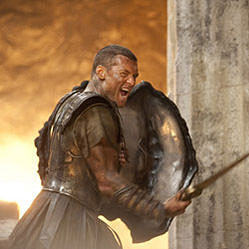 In second place was the African-American melodrama "Why Did I Get Married Too?" by writer, director, and actor Tyler Perry, with 30.2 million dollars in receipts.

The animated adventure "How to Train Your Dragon" was in third place, pulling in 29.2 million dollars, while the debut of the romantic Miley Cyrus movie, "The Last Song," was fourth with 16.2 million dollars in ticket sales.

That put it ahead of "Bounty Hunter," a comedy starring Jennifer Aniston and Gerard Butler, which came in seventh with a 6.2 million-dollar take, and "Diary of a Wimpy Kid," an adaptation of the Jeff Kinney cartoon novels, which slipped three places to eighth place with 5.5 million.

Ninth place went to the romantic comedy "She\'s Out of My League," in which a stunning beautiful woman and a dorky guy fall improbably in love, which earned 1.46 million dollars this weekend.

It came just ahead of Martin Scorsese\'s "Shutter Island" which was in 10th place, which also earned 1.46 million dollars.