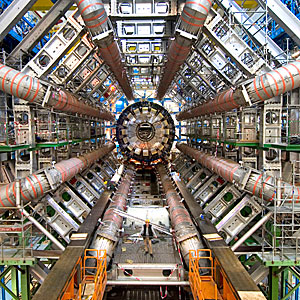 The world\'s most powerful atom smasher will be brought up to unprecedented power by early April, the European Organisation for Nuclear Research said on Wednesday.

"We hope to have collisions at 7.0 TeV (teraelectronvolts) at the end of March or the beginning of April," CERN spokesman James Gillies told AFP.

The 3.9 billion euro (5.6 billion dollar) Large Hadron Collider (LHC) was restarted after a winter break two weeks ago to ready it for collisions at unfathomed energy levels.

The particle collider -- inside a 27-kilometre (16.8-mile) tunnel straddling the Franco-Swiss border near Geneva -- is aimed at understanding the origins of the universe by recreating the conditions that followed the Big Bang.

"During this first physics run, the LHC experiments will open up the biggest range of potential new discovery that particle physics has seen in over a decade," CERN said in a statement.

Gillies reiterated that the experiments would run for 18 to 24 months before another technical shutdown.

That halt would last for eight to 10 months while the LHC is prepared for the next stage, full power operation with beams running at 14 TeV, he added.

CERN\'s engineers decided in January to change the annual cycle they followed with its previous, smaller, accelerator, which used to be shut down for four months in winter for maintenance.

Instead they were aiming for longer period of continued operation with the LHC followed by a longer shutdown when needed, because of the total of two months its takes to heat up then cool down the huge cryogenically cooled colliders before and after maintenance.

The collider was revived from a 14-month breakdown last November, following a technical glitch that put it out of action days after it was launched in September 2008.