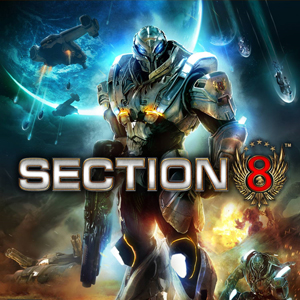 Battlefield-inspired and Tribes-like, Section 8 is fun but ultimately won\'t last you too long...

Section 8 is at a place few games want to be: it\'s not awesome enough to be played like genre heavy-hitters, and its not hopeless enough to be played through for sheer, dumb fun. Borrowing ideas from multiple sources, Timegate has slapped together a multiplayer experience that has merits, but might have trouble sticking in the minds of gamers for long.

Section 8\'s single player component is like that of many multiplayer-focused games: a mediocre second-thought. What Timegate has done is repurpose the multiplayer levels for a series of objective-based missions tied together by a "plot." However, these missions can help in training and are quite noob-friendly.

Section 8 focuses on one multiplayer mode, named Conquest. Although it is primarily influenced by the Battlefield school of thought, there are a few much-needed twists. In the vein of Enemy Territory: Quake Wars, the game periodically dolls out DCMs, or dynamic combat missions. These give you points for completing a variety of different objectives and are generated on the fly to mix things up. Capturing a point involves hacking that point\'s computer, essentially standing there until a timer runs out. DCMs also give some additional perks, such as temporarily revealing the positions of enemy players.

Continuing to follow conventions, your character can only hold two weapons at a time, meaning you\'ll have to carefully customize your loadout from Section 8\'s modest selection of weapons to fit your playstyle. You won\'t be surprised by the weapons selection, which contains the requisite assault rifle, shotgun, and sniper rifle. In addition, your character can carry a variety of tools like mines, repair wrenches and sensor jammers.

Section 8 plays slightly differently from a standard first-person shooter. If you hold down the sprint button for a while, your suit will put you into "overdrive" mode, letting your character race across the battlefield. Jumping is assisted by hover packs that create a more dynamic three-dimensional battlefield, letting players get to vantage points and alternate entry points. Combat is assisted by a lock-on function that can help players overwhelm stationary or unsuspecting enemies. This feature isn\'t very obnoxious on the 360, but it might put off PC players who are annoyed by any form of auto-aim. The game also features a basic economy system which lets individual players buy turrets and vehicles using points gathered from achieving different objectives. Some of these buys are more useful than others, with turrets proving to be the better buy. Each turret is specialized and is able to defend control points in the absence of live players. Vehicles are next to useless, with the mech moving at a plodding pace and tanks not being able to handle the terrain. Due to such disappointing vehicular combat, the variety and value of Section 8 takes a huge hit with its\' limited weapons selection.

Section 8\'s soundscape is filled with some rather generic sci-fi effects. Graphically, the game looks like its running on dated technology that fails to impress: lighting is fine but the variety of low-resolution textures can soon become an eyesore.

The final result is a mixed-bag of a shooter. In such a competitive environment, this is often a death-blow for a game\'s sales and popularity. If you\'re really into the Battlefield style of play and can deal with some inconsistent presentation and potentially low player populations, then get this once its price has dropped a bit. Otherwise, don\'t bother joining Section 8.

Presentation: 7.0 – Desolate science fiction setting with heavily-armored space marines... Where have we seen that before?

Graphics: 6.5 – A mish-mash of differing degrees of technical mastery that is mostly soured by weak looking environmental detail and textures.

Value: 7.5 – The multiplayer has the potential of being fun, but the game\'s dwindling playerbase could be a cause for concern...

Final Score: 7.0 – Section 8 is derivative, but fans of point capture gametypes could find some use of their gaming hours with it.