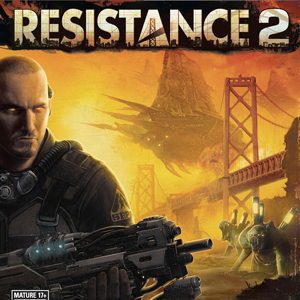 A value-packed sequel that has much more staying power than its predecessor.

When Resistance: Fall of Man released alongside the PS3 back in 2006, gamers were impressed by its great gameplay and powerful presentation, creating a solid FPS franchise that Sony fans could call their own. It is for this reason that they rightfully looked forward to the next installment, Resistance 2. The game is here, turned around in a quick two-year development cycle. Fortunately, it primarily builds on some of the strengths of the original and emerges as a much stronger overall package.

The campaign picks up immediately after the end of the first game, quickly bringing Hale to the United States, the last major industrial power to stand in the path of the Chimera. Unfortunately, the sequel doesn\'t aspire to much improvement in regards to the plot and characters. Nathan Hale has gained a voice, though he doesn\'t say anything beyond barking loud orders. The one stand-out is the radio personality Henry Stillman, who provides a regular American\'s perspective on the horrors of the continuing Chimeran invasion.

The campaign, as the one found in the first, offers a varied experience that takes you to a variety of locales and pits you against platoons of assorted Chimeran enemies. The weapons are mostly functionally the same, besides additions like the .44 Magnum and shield-equipped minigun, resulting in an arsenal that remains one of the most unique in the genre. Tossing the segmented health bar, Insomniac has implemented a more traditional total recharge system in the vein of recent Call of Duty and Halo games. It\'s a change that might ironically segment the community\'s response to the game, but fortunately doesn\'t change too much in regards to the pacing. The checkpoints, while improved, are still slightly irritating.

The most striking addition to the single-player experience is quite simply a sense of scale. The first moments of the campaign has you alternatively running from and fighting with a gigantic spider-like machine. And this is hardly a one-off experience: you\'ll constantly be hounded by a variety of huge Chimeran beasts who tear up the American environment. Unfortunately, these fights often feel gimmicky, relying on the use of very specific weapons and directions to take them down, relying in an experience that hardly changes across playthroughs. In general, the campaign is a decent experience, but it doesn\'t leave the same striking impression that the first game\'s did.

Insomniac\'s obsession with super-sizing extends to the game\'s other modes. Multiplayer can now be a 60 player affair, a scale rarely seen in FPS games outside of the PC platform. The game\'s one stand-out mode, Skirmish, has each team divided up into squads that continually receive new objectives to complete, constantly changing the pace of the gameplay. In this mode, teams are divided up into squads, and each squad receives on-the-fly objectives to complete. Just as with the first game, the competitive mode is a great experience that well-realized and integrated into the fabric of the package.

Surprisingly, neither of these modes are the highlight of the game. This honor goes to the game\'s co-op experience, bringing together eight players in a unique take on this genre staple. Players choose from a selection of three classes that compliment each other in the vein of games like Team Fortress 2. Medics drain health from enemies and pass them out to allies, Special Ops provide ammunition, and Soldiers possess a powerful minigun that is also capable of projecting a powerful energy shield. A successful team has to possess a balanced assortment of all three classes if it wants to succeed, leading to a brilliantly-conceived and enforced sense of cooperation. As in the other modes, you are also constantly gaining experience points in order to unlock new weapons, gear, and abilities. Fortunately, the game mixes up the objective string in each map in every playthrough, leading to a greater sense of variety. The Chimera are even more numerous in this mode, making it even more important to work together. In the end, the combination of all of these factors makes co-op the most satisfying part of the Resistance 2 experience.

Running on Insomniac\'s third-generation Playstation 3 technology, Resistance 2\'s visual presentation incorporates numerous small improvements over the first game that add up to a generally better-looking game. These improvements are most evident in the lighting of the game, which extends far beyond the overcast and dark environments of the first game. The most impressive thing about the visuals is how Insomniac managed to preserve the franchise\'s buttery-smooth framerate after upgrading the game\'s visuals.

Like it\'s predecessor, Resistance 2 is a marque Playstation 3 title. Even though its campaign doesn\'t have the same impact as the first\'s, the addition of the co-op mode, in combination with numerous improvements throughout the entire game, makes it a satisfyingly-stronger installment than its progenitor.

Gameplay: 9.0 – Whilst the campaign is brought down by a combination of pacing and other issues, the addictive co-op and large-scale competitive modes are amazing experiences.

Presentation: 9.0 – A powerful sense of scale communicates the action and desperation of the Resistance universe.

Graphics: 9.0 – The game looks even better than its predecessor and manages to keep the smooth playability intact.

Value: 9.5 – The cooperative and competitive modes can last you quite a while.

Final Score: 9.0 – A great, action-packed and value-filled follow-up to a premier FPS game.