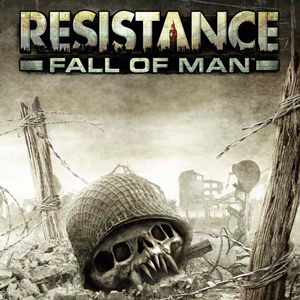 The first, great exclusive FPS experience for owners of the Playstation 3.

With the advent of the Xbox and Halo: Combat Evolved, the gaming world finally found a formula and framework with which they could bring the traditionally PC-based First Person Shooter genre to consoles. Since then, FPSs became a mainstream genre, bringing in multimillion sellers nearly every few months. Up until recently, the Xbox family was the go-to choice for console FPSs, due mainly to its role as the Halo platform and its PC-like architecture. Sony never really challenged Microsoft\'s line-up in the Playstation 2\'s heyday, with their sole big-budget attempt, Killzone, ending up as a critical flop. Fortunately, things have changed following the advent of the Playstation 3. Insomniac Games, creators of action/platformer franchises such as Ratchet and Clank and Spyro, have created what is arguably Sony\'s first real big- FPS success story: Resistance: Fall of Man. It\'s a well-rounded game, drawing on previous console attempts to create a fun and comprehensive experience that is set in a consistent and interesting world.

Instead of drawing on the generic space-marines-from-the-future premise, Resistance sets itself in an alternate reality: one where World War II never happened and a supposed biological weapon brings an army of monsters named the Chimera upon the ill-prepared human world. Quickly overrunning Asia and Europe, the Chimera begin to siege Great Britain as American soldiers are sent to assist the British in their fight. You play as Nathan Hale, one of these soldiers. After a horrific encounter, Hale is changed forever and finds himself behind enemy territory, attempting to slow down the enemy advance. In another departure from tradition, Resistance\'s story is narrated by an officer who witnessed Hale\'s adventure first hand, combined with old-style black and white photographs that translate the believability of the time period quite well. All in all, the story has some holes, but it\'s much more serviceable than that of most other games.

In terms of gameplay and controls, Resistance borrows a lot from other console shooters, but this is hardly a fault. The analog sticks are used to aim and move, while shoulder buttons activate your weapon\'s firing modes. The Sixaxis is used sparingly: its main function is to throw off Chimeran creatures that often try to grab you by the throat or to throw off flames in multiplayer matches. The health system is somewhat unique, utilizing a segmented bar that only regenerates to the nearest section after you get hit.

Resistance\'s strengths will come to no surprise to fans of Insomniac\'s previous games: superb and unique weapon design and presentation. Every weapon serves a unique function and sports an alternate firing mode that can really change the dynamics of the battlefield. Stand-outs include the Chimeran bulls-eye, whose alternate fire shoots out beacons that allow your primary fire bullets to guide themselves toward your target, the Fareye, a sniper rifle that can briefly slow down time, and the auger, which can shoot through walls and put up temporary energy shields. Some of the other weapons are normal FPS fare, but they do end up rounding out a varied and interesting selection.

The Chimera can simply be described as a menace. Whilst weak individually, the standard Chimerian Hybrids are a devastating force when organized into squads, dealing out supression fire, flanking, and generally moving constantly. Utilizing cover and throwing grenades to flush them out is a must, especially on higher difficulty levels. There are other enemies like huge spider mechs, small head-hugger-like enemies, and heavy-weapons-giants. The AI for most of these enemies is great and helps make each battle an interesting and trilling experience. Unfortunately, due to the late stage of the war, your fellow human allies are few and good for little more than temporarily diverting the enemy\'s attention as they slaughter them. All-in-all, the campaign is a well-paced and varied 12 hour experience that is up there with most FPS campaigns. The addition of a local co-op mode and military intelligence pick-ups are great bonuses.

There are a few blemishes here and there. Whilst there are many types of enemies, the Hybrids are very prevalent and become slightly monotonous to fight as the campaign moves on. The difficulty curve is also very inconsistent, and when combined with inconsistent checkpoint placing, can lead to long stretches of repeated attempts at extremely difficult stretches

Most big-hitting FPS games contain a powerful multiplayer experience that generally extend the value of their package. Resistance is no exception, featuring a variety of maps and variants. There are three, somewhat unique modes called conversion, meltdown, and breach. Conversion is an elimination gametype, while the latter are variants of assault modes that have teams capturing points. As the teams consist of Chimera and Humans, there are important differences between the two sides. Humans are quick and able to utilize a radar. Chimerans, on the other hand, can enter a rage mode that makes them tougher and makes them temporarily capable of seeing through walls. Whilst the there isn\'t much innovation in the multiplayer, a combination of the strong elements of its base gameplay and presentation make it a quality experience.

Graphically, Resistance is a solid effort. Utilizing the first iteration of Insomniac\'s PS3 engine, it still manages to provide a great visual experience with few rough edges. The Chimera are a fast-moving and well-animated enemy, punctuated by amazing lighting from the environment and weapons fire. The visual design of the game is also quite distinctive, combining the old styles of England with the cold, metal look of Chimeran architecture. The frame rate is buttery-smooth, despite all of the action happening on screen.

The audio is great, but nothing surprising in comparison to other AAA franchises. Weapons effects are loud and powerful, appropriately reverberating through the environment due to some specialized Cell programming. The Chimera sound great, growling at the appropriate times. The music is fittingly orchestral, but ultimately forgettable like in many Hollywood-blockbusters. There\'s no five note segment like those that fans of franchises like Halo will find instantly recognizable. Resistance\'s musical score is fittingly bombastic, symphonic stuff and picks up sparingly during particularly key moments during the campaign. Voice acting is minimal but passable.

Resistance: Fall of Man is a triumphant first effort for a studio just getting into the First Person Shooter arena. It is fun, varied, and cinematic, building on elements of shooters that came before to create a solid experience that PS3 owners shouldn\'t miss out on.

Presentation: 9.0 – All of the hallmarks of a big-budget shooter are here: cinematic visuals, smooth gameplay, and a decent plot.

Graphics: 8.5 – It\'s not the best-looking game out there, but the smooth framerate is impressive given the amount of action that can happen on screen at once.

Sound: 8.5 – Music and voice acting don\'t aspire to be anything shocking, but the sound effects of both weapons and enemies are well-realized.

Value: 9.0 – The campaign is quite long, assisted by co-op and collectibles. Those looking to extend Resistance\'s value will be satisfied by its well-realized multiplayer offering.

Final Score: 8.8 – It doesn\'t set the FPS world on fire, but it does provide a great experience and a solid launch pad for a promising AAA shooter franchise.