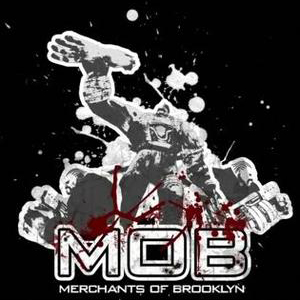 With most of the industry seemingly utilizing Epic\'s Unreal Engine 3, new games employing different technology are like a breath of fresh air for many gamers. The first third-party commercial release utilizing Crytek\'s Cryengine 2, Merchants of Brooklyn could have been an interesting and unique indie effort in the vein of Zeno Clash. Unfortunately, everything from its shoddy launch bugs to its\' gratuitous visuals makes it very difficult to recommend.

Merchants\' premise is a future where global warming has overtaken the world, forcing its inhabitants to live in high-rise cities and buildings. Apparently, to construct this civilization, mankind brought back and cloned a group of Neanderthals. Of course, once their tasks were finished, they were delegated to the lower levels, where the Merchants of Brooklyn captured them to battle in arena matches.

You play as Matteo, a genetically-modified Neanderthal. With a Bionic Commando-esque mechanic arm, you fight through the city, destroying everything that gets in the way. There isn\'t much else to the story, but its definitely not a focus here. After an unnecessarily Kojima-length introduction cutscene, you are thrust into one of these arena fights.

Fighting is simplistic, giving you control of your left and right fists with your mouse buttons. Punches can be charged by holding down the right button, resulting in explosions of blood if you manage to land them. As you progress through the game, you receive "downloads" that allow you to transform your bionic arm into different types of weapons. This aspect is the game\'s strong suit, giving you a wide variety of tools that you can use in any situation. Building on this, Matteo has the ability to pick up and charge any object with energy, turning it into a grenade that can devastate your foes.

Visually, MoB is a strange mix of comic book-style graphics and intense gore effects. Some might find the visual style interesting, but it is ultimately unappealing and tends to wear on the senses after a while. Fortunately, the level design is distinct and will have players approach different stages of the game with slightly differing approaches.

Difficulty-wise, MoB shouldn’t provide much of a challenge to regular FPS players due to a combination of generous regenerative health and inconsistent AI. Enemies will try to overwhelm you with numbers and sometimes lose their minds and get stuck in level geometry.

Unfortunately, even after its multiple patches, MoB has multiple issues. The framerate, even on high-end machines, is oddly inconsistent: sometimes, the game runs worse than Crysis even though its levels are nowhere near as complex and detailed. To make matters worse, the game exhibits a lot of clipping and audio issues and often crashes. And this is all contained in an experience that will last most players at most five hours.

In the end, Merchants of Brooklyn is a mess of a game whose few shining aspects are wiped out by its many issues.

Gameplay: 5.5 – The gameplay is simplistic FPS fun with some strategy in the form of weapons usage. Unfortunately, the AI is dull and becomes boring to fight.

Graphics: 6.5 – Some of the art elements are interesting and the engine is definitely technically strong, but there are many inconsistencies and bugs.

Sound: 6.0 – There isn\'t anything distinct about the sound effects and the voice acting definitely starts to grate on the nerves after a while.

Final Score: 5.7 – Merchants of Brooklyn is simply not polished enough for public consumption.