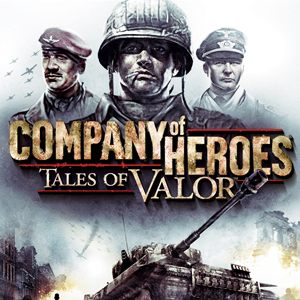 A good buy for veterans of the original, newcomers should look at the other entries to get started...

Recently one of the busier studios in the gaming industry, Relic Entertainment has been quite busy releasing iterations of its two main franchises. The most recent Company of Heroes installment, Tales of Valor, is a stand-alone expansion in the vein of Opposing Fronts, the previous release. Unlike that expansion, Tales of Valor doesn\'t introduce any new races, instead focusing on smaller tweaks and additions that add variety to the gameplay.

The most obvious addition are three new "mini-campaigns" that are smaller in scope, but radically different, than previous campaigns found in the franchise. Drawing upon some of the conventions introduced in Dawn of War II\'s campaign, these mini-campaigns feature no base-building and are instead focused upon the commanding of small groups of units. A related innovation is the addition of Direct Fire that allows players to control the aiming and firing of their units. It\'s an entertaining gimmick, but it introduces several problems, particularly when you\'re trying to move in one direction and shoot in another, causing you to lose a few seconds of engagement time. It\'s easier to let the AI handle all of the moving and shooting


Fortunately, the missions themselves retain the quality that previous campaigns contained. Their premises are compelling, and even though they might be of limited length, they\'re definitely satisfying to play through.

In terms of multiplayer, there are some notable new additions. For this release, Relic has released three new multiplayer modes that are a vast departure from classic multiplayer. Operation Stonewall has players team up to defend their barracks in the middle of a small town. They have to team up in order to defeat increasingly larger and more difficult waves of enemies, forcing players to manage their unit types in order to provide the most effective defense possible. Operation Panzerkrieg is a heavily modified version of the traditional victory point contest, giving players control of only one tank. Each tank fills a vastly different role, and players are given some unique commander abilities, making this mode a satisfying showcase of tactics. Operation Assault is another mode that has players take control of a single unit, an infantry hero. Each side is tasked with destroying a fuel depot on either side of the map, but they are defended by multiple lines of MG nests, AT guns, and trenches. All the while, AI-controlled infantry are charging into the fray from both sides, creating a chaotic melee. This mode suffers slightly from the linearity of the map, putting a damper on any fancy tactics that one might otherwise like to pull off.

The problem with these modes is that they each only ship with one map. Although these maps are mostly well-designed, we would have appreciated it if there was a little more variety to mix it up. Relic has promised additional maps, but as it stands, one will probably get bored of the modes before long. There are some new units, but they\'re mostly designed as substitutes and won\'t radically change the game. Still, they\'re entertaining to play around with and let you modify your tactics in subtle.
Tales of Valor is a worthy addition to the Company of Heroes franchise, but its appeal will mostly be limited to those who are veterans of the series and are really looking for something new to mix up gameplay conventions. The new missions and new modes are nice, but we would have liked it if Tales of Valor shipped with more maps.

Presentation: 8.5 – Quality cutscenes and voice-acting that set an authentic tone for the single player missions.

Graphics: 8.5 – The Essence Engine renders some impressive real-time cutscenes and renders the new maps with great detail and smooth performance.

Sound: 8.0 – Same quality voice-acting and sound effects that we\'ve come to expect of the franchise

Value: 7.5 – The new mechanics are interesting, we just wish there was more content to back them up.

Final Score: 8.2 – Tales of Valor offers some new ideas that are intriguing, but they\'ll mostly appeal to veterans of the series and should have been released with a little more content to flesh them out.