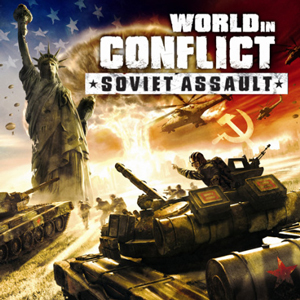 World in Conflict was one of the premier strategy titles of 2007 for its fast-paced gameplay that appealed to those adverse to resource-collecting. The first add-on to that game, Soviet Assault, took an excessive amount of time to arrive due to unforeseen events such as corporate mergers and restructuring efforts. Soviet Assault is finally here, but does it live up to the explosive reputation of its predecessor?

For $20 dollars, one would expect a reasonable, if not exorbitant, amount of content. At first glance, the six single player missions and two multiplayer maps seem to be a good deal.

The new missions take place from the Soviets\' point of view during the war described in the original\'s campaign. All of the quality aspects of the original campaign missions are here, from excellent voice acting, to well paced objectives, to a decent plot which has some rather powerful moments. The majority of the maps used in these missions are former recycled multiplayer maps, but there are some stand-out moments such as breaking through the Berlin wall to take NATO forces by surprise in the opening shots of the war.

The two multiplayer maps offer some nice new arenas to play around, adding some more variety to the already diverse line-up present from the original game and subsequent free DLC. Unfortunately, these maps are also now available as free downloads for owners of the original game.

And that\'s where Soviet Assault falls flat on its face: value. Considering that these multiplayer maps are now free, you\'re essentially paying $20 for six single player missions. They are quality content, but they\'ll only last three hours on normal difficulty and they don\'t offer much incentive to come back again. Also, considering that these missions are integrated into the original campaign, they\'ll require a commitment to the story in order to understand what\'s happening. This is a little too much to ask of players who played through and finished with the original campaign over one and a half years ago. It\'s simply. asking too much for too little a return.

Hopefully, Massive\'s next project will have a little more meat on its bones. As it stands, Soviet Assault is a quality, but vastly overpriced, add-on that should be overlooked until a much-needed price drop occurs.

Gameplay: 8.5 – Quality single player missions that measure up to content of the original game. Doesn\'t introduce anything new, but if it ain\'t broke, don\'t fix it.

Graphics: 8.5 – Still one of the better-looking RTS games out today.

Sound: 8.0 – Quality voice-acting, but no new sound effects to mix it up.

Final Score: 7.9 – Wait until this expensive add-on gets a price drop before you spend your cash on it.