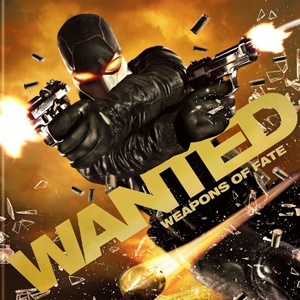 Wanted: The Weapons of Fate is quite similar to its cinematic counterpart: an explosion-filled romp that doesn\'t end up being more than a competent entertainment experience.


The plot takes your character (either Wesley or his father Cross) through action scenes and firefights set before and after the events of the movie. Like the film, the story is disjointed and uninteresting, involving some kind of civil war inside the Fraternity.

Fortunately, the gameplay is more interesting that the plot. The basic structure follows that of third person shooters like Gears of War, but adds in some mechanics that are befitting of the franchise and give it its own, unique vibe.


Wanted\'s most interesting addition is the bullet curve mechanic. To activate it, the player has to charge up his Adrenaline meter (obviously, by killing foes) and hit a specific button. This brings up a simple and elegant guide that lets you pick your bullet\'s trajectory. This allows you to take out guys easily from the safety of cover. Adrenaline can also be used for the less impressive mechanic of bullet time, which requires no additional explanation. In addition, you can blindfire to pin down enemies and allow you to flank them. Combined, these elements give you the tools needed to defeat any situation, some of which (like the plane level) are action packed and fun.

Unfortunately, there are some issues with Wanted. The movement is designed to make advancing simple, but retreating is awkward and difficult. Unlike Gears of War, it doesn\'t break up its action well and has you rinsing and repeating its\' cover and fire mechanics. Turret sequences are awkward and derivative. There is a lack of variety, in both weapons and enemies. Animations and quick-time events are repetitive and feature little or no variations. The boss fights all boil down to repeatedly pounding them with your curved shots. These flaws, combined with the game\'s mediocre length of five hours, outshine any advantages that the game might possess.

In the end, Wanted: Weapons of Fate is an example of a movie game that doesn\'t suck. But that\'s all pretty much all the praise that one can give it.

Gameplay: 7.0 – Wanted adds some franchise-specific mechanics to its third person action, but it doesn\'t do anything particularly well nor does it escape the curse of monotony.

Presentation: 8.0 – Captures the feel and atmosphere of its source material quite well.

Graphics: 7.5 – Nothing spectacular, but nothing bad either.

Value: 6.5 – $60 for five hours of merely competent gameplay is a little too much.

Final Score: 7.2 – Wanted: Weapon\'s of Fate is a not bad game, but it certainly does little to stand out from the crowd.