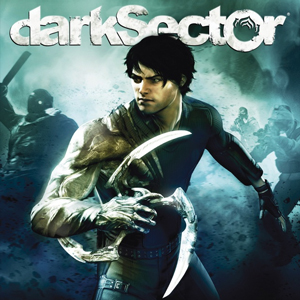 Huge blockbusters such as Gears of War and Call of Duty 4: Modern Warfare often set the standards going forward for their particular genres, spawning multiple "clones" that attempt to live up to their original progenitors while introducing specific twists. Most of these efforts are shunned by the public, and rightfully so. However, once in a while, a game does enough to warrant a second look. Dark Sector is one such example.

From the start, the campaign sets off a dark and oppressive mood that is a tad more interesting than what we\'ve seen in most dark and oppressive games. Gameplay basics are build around the run, cover and shoot mechanics that Gears of War pioneered 2 years ago, so any shooter fan won\'t have much difficulty picking up the game and playing.

Dark Sector\'s unique twist is the glaive that your character (named Hayden) comes across after the first few moments of the game. It is a powerful weapon, decapitating or dismembering enemies in brutal "finisher" moves or slicing through groups of soldiers after you\'ve thrown it. In fact, the glaive is so powerful and useful in combat, you\'ll find yourself using conventional weapons less and less as the plot progresses and its powers grow. Besides being a weapon, the glaive allows you to pick up distant items and unlock doors. Its most intriguing application is its ability to absorb "elements" such as fire, ice and electricity, allowing you to destroy your enemies in even more spectacular ways. There are also some puzzles, most of which involve burning sheets of goo that you often find blocking your way. They become a little too frequent and actually end up slowing the pace of the game too much. There are also some unwieldy exploratatory sequences, but they provide you with currency that you can use to buy weapons at the black market. Desipite these hurdles, the brutal combat and stop-and-pop action come pretty close to offering an alternative to a Gears campaign.

Hayden encounters several bosses along his journey and they are actually quite diverse, requiring different weapons and tactics to take them down. They aren\'t overly difficult (strangely, the game has only one difficulty setting) but the real trick is figuring out the key to beating them. You\'ll rarely die in these or other encounters, as Hayden recharges health quickly and is able to take quite a beating. In general, the campaign doesn\'t do much new, but it retains solid and unique-enough game mechanics that allow it to rise above mediocrity.

Visually, Dark Sector has few weaknesses. Although it runs on proprietary technology, it usually manages to pull off most of the same graphical tricks that games using the more prestigious Unreal Engine 3 are able to show off. There are some low quality textures, but they don\'t take away much from the overall experience. Audio design is pretty impressive as well, amping up the creepiness factor of certain enemies and environments.

Even the just-released PC port of Dark Sector can be had at a budget price, so there are definitely worse ways of spending your gaming dollars. The game also features a rather simplistic multiplayer offering, consisting of two modes. Epidemic has two teams of soldiers led by Haydens trying to kill the opposing team\'s leader while Infection pits one Hayden against everybody else. These modes are fine, but player populations on both console versions are rather sparse. In fact, this is one area where the PC version has a distinct disadvantage, as multiplayer can only be played over LAN.

It\'s not the next million-selling shooter blockbuster, but Dark Sector does manage to capture the one ingredient that many games seem to forget to convey: fun. For $20, you can hardly go wrong with Dark Sector.

Gameplay: 8.0 – Doesn\'t do much to break the mold. Wrecking groups of enemies with the blade is brutally satisfying.

Graphics: 7.5 – Doesn\'t look spectacular, but at least it holds its ground against other titles of this generation.

Value: 8.0 – Considering its available at a value price on all three platforms, there are definitely worse ways of spending your money.

Final Score: 7.8 – Want more stop and pop action? Dark Sector is worth a look if you\'re sick of Gears of War.