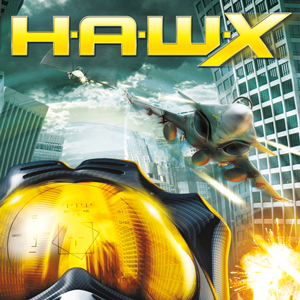 HAWX is a quality arcade flight experience that builds on the successes and failures of its predecessors.

Ubisoft made an unknowingly brilliant move when it teamed up with Tom Clancy to publish the original Rainbow Six and Ghost Recon games. Since then, the Tom Clancy brand has become one of its bread-winners, important enough for the publisher to buy the rights to Clancy\'s name, giving them even more power to utilize and exploit it for bigger things, like a rumored MMO. HAWX, like EndWar, is the introduction of a new sub-series within the franchise - building on arcadey, Ace Combat-like, flight-combat mechanics and helping bring them further into the mainstream.

You play as Major Crenshaw, a former Air Force pilot that flew for HAWX squadron before it was disbanded in 2014. You join Artemis, a PMC that works for the highest bidders (examples are corporations and the Brazilian government) When Artemis finds itself pitted against US forces, Crenshaw switches allegiance again. And so begins a simple plot of tense combat situations and socio-political commentary - a staple of most Tom Clancy games. The plot isn\'t an important piece of the overall experience, but at least it provides a structure that keeps the missions moving along.

Fortunately, the gameplay is fast and satisfying, providing a wide variety of missions that ensure you\'ll never get bored as a result of tedium. The game is predictably arcadey, providing your jet with dozens of missiles that let you take on entire military detachments and air squadrons. It\'s not a game for those looking for an authentic simulation experience, but those looking for some Michael Bay-esque explosive actions should look into this title.

From the start, players will notice that HAWX is simple and easy to pick up. Steering, yawing, firing, and even issuing orders to wingmen are only a couple of button presses away. Where HAWX mixes things up is with its Enhanced Reality System, letting the computer choose the best paths to your targets and objectives. This projects digital gates that you simply fly through to avoid missiles or come up behind enemies. Some missions encourage the use of ERS, but it\'s not something one can rely upon to play through the entire game. You can switch the system on and off, allowing you more precise control of your plane and pulling out the camera to let you see more of the airspace. Due to the constant motion of the camera, this mode is truly more difficult and disorientating.

HAWX often teams you up with a team of wingmen. However, even though you can order them around, they\'re good for little more than flying interference against your enemies. You\'ll still have to do the bulk of the heavy lifting yourself. Fortunately, you can bring in up to three friends to play through the scenarios in a cooperative mode that\'s much more interesting than the campaign.

HAWX\'s multiplayer offering is much less interesting than its co-op-compatible campaign, amounting to little more than an player deathmatch. There is a surprising number of maps (19 in all) and some interesting unlockable abilities, but the multiplayer won\'t hold your attention for long.

The planes in HAWX are superbly detailed. In addition to some great texture work, there are some stunning effects, such as afterburner glow and missile launches, that look stunning, especially in DirectX 10 mode. However, the environments, while looking great from a distance, are glaringly low-res and pixelated. Fortunately, as you\'ll often be busy with some high-speed aerial combat, it\'ll be difficult to notice the faults in the environment. Sound-wise, the game authentically replicates the effects of real planes.

All in all, HAWX is an easily-controlled and well-presented arcade experience. Despite its limited multiplayer options, HAWX\'s high-action campaign is an appealing option for anyone looking for a forgiving but rewarding air combat experience.

Gameplay: 8.5 – HAWX provides a fun and easy gameplay experience. The ERS system helps guide the experience, one that it is filled with enough variety and action to eliminate any possible tedium.

Presentation: 8.0 – A decent plot and adequate voice acting provide enough of a shell to build on HAWX\'s gameplay.

Graphics: 8.0 – Subpar environmental modeling is balanced out by some great looking plane models and particle/lighting effects.

Value: 8.0 – Despite a relatively subpar multiplayer component, the campaign and co-op options are worth the price.

Final Score: 8.2 – HAWX is a quality arcade flight experience that builds on the successes and failures of its predecessors.