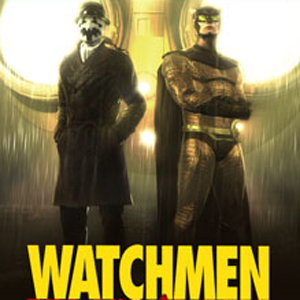 Beautiful but ultimately repetitive and expensive, The End is Nigh is difficult to recommend...

Watchmen has historically been called an "impossible" franchise to transfer into other mediums. With the announcement of a Hollywood adaptation, many expected some sort of video game tie-in to capitalize on the franchise\'s new-found popularity. The result? Deadline Games, makers of the fun but disappointing Total Overdose: A Gunslinger\'s Tale, have released the first installment of Watchmen: The End is Nigh, a series of downloadable episodes that develop a story set before the mystery of the graphic novel and film. Creating a beat-em-up in such a universe might be seen as a strange choice, but one realizes that there aren\'t many other genres that would fit either the setting or the episodic model. So, is the End of Nigh worth twenty of your precious smackeroos?

From the start, gameplay is simple and easy to master when you play as either Rorschach or Nite Owl, the two protaganists of this tale. Whichever character you choose will be able to employ quick or heavy attacks. The basic combat is enjoyable: I found myself settling into a rhytmic pattern as I dished out a series of quick strikes and punches. After a short while, you start unlocking different combos that can be used to finish off enemies quicker or defeat new foes that are able to defend against your basic attacks. Once you get an enemy into the proper position, you\'ll be able to execute a finisher that gruesomely takes them out. The two characters have some other moves, including a counterattack that makes it easier to fight armed foes and disarm them in addition to two special attacks: a bull rush and a Rage mode for Rorschach, and a stun grenade and area-of-effect electrical blast for Nite Owl.

The game does try to mix it up through the introduction of new environments and several different types of criminal lowlife, but it ultimately ends up being repetitive as your characters will be doing little more than pounding through waves of enemies. Ultimately, you\'re paying $20 for five hours of the same gameplay mechanics recycled over and over, hardly an appealing prospect for most.

For a downloadable game, Watchmen showcases some pretty high graphical standards. The character models are great given this generation\'s standards and the animations make the fights impressively believable. The detailed environments are great and there is a surprising amount of special effects and shadowing at work. There are some decent, comic-styled cutscenes in between, but they don\'t particularly leave you with a lasting impression.

Despite all of its pluses, The End is Nigh is ultimately too little for too much. It becomes repetitive an hour in and is simply a terrible value for the $20 price-point. Chances are you won\'t come back after you beat the game the first time, essentially making it a waste of both time and money.

Gameplay: 6.0 – It has good beat-em-up mechanics, but thats pretty much it.

Presentation: 7.5 – Pretty good for a downloadable game: the use of comic-styled cinematics might not blow anyone away, but at least it makes the experience seem more authentic.

Graphics: 8.0 – Looks great on both the technical and the artistic spectrums.